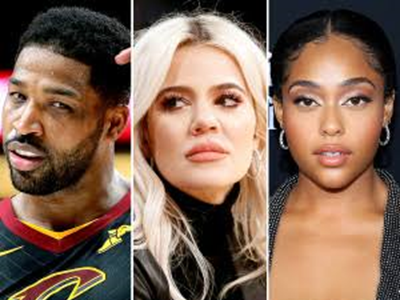 Reality star, Khloe Kardashian, has broken her silence over claims her baby daddy, Tristan Thompson, cheated with her sister Kylie’s best friend, Jordyn Woods.
Although the ‘The Keeping Up With The Kardashians’ star has yet to officially post a statement on the recent rumours surrounding Thompson’s alleged infidelity with Woods.
Kardashian appeared to hint at the truth as she posted a series of shouting face emojis underneath a post narrating the alleged incident on Hollywood Unlocked’s Instagram.
Her best friends, Malika Haqq commented “STRONG FACTS,” while Larsa Pippen added an “Amen!”
The post read: “At #TristanThompson’s house party and saw what went down! @kyliejenner we need you to address some thangs with @jordynwoods.
“Anyhow, #JordynWoods stayed at his house until approximately 7am. Who needs to go?! Comment below!”
On Tuesday, TMZ reported that Kardashian dumped Thompson after learning that the NBA star had got close to model, Woods at a party on Sunday night.
Hollywood Unlocked shared a similar report, also claiming that a partygoer had claimed that the pair were “all over each other and it wasn’t just friendly”.
The scandal comes less than a year after Thompson was linked to multiple affairs just days before Kardashian gave birth to their daughter True.
He was seen partying with several different women while the pregnant reality star was in the hospital prepared to welcome their first child in 2018.