Khan: Mayweather ‘scared’ of me 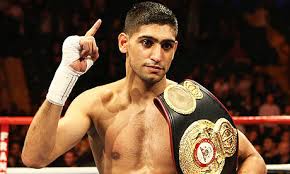 Amir Khan insists Floyd Mayweather is “scared” to fight him and claims he even offered to fight the former welterweight king for free.
Khan is scheduled to challenge WBC middleweight champion, Saul ‘Canelo’ Alvarez, on May 7 in his first fight above welterweight.
The 29-year-old former Olympic silver medallist has long campaigned for a fight against Mayweather but with the self-proclaimed “best ever” now retired following his win over Andre Berto in September, Khan has been forced to move on.
“We thought we got very close to making that fight happen,” Khan said, in an interview with TMZ Sports. “Floyd, to be honest, is too scared to fight me. I did everything to make that fight happen.
“I spoke to my team, and I even said ‘I’ll fight you for free,’ just to show the world that I’m a better fighter than him, but he just didn’t want to fight me and wanted the easy way out.”
According to Khan, Mayweather is not the only prominent welterweight to refuse to step into the ring with him.
He claims Manny Pacquiao also turned down a fight, while WBC welterweight champion, Danny Garcia, denied him an opportunity to avenge his 2012 fourth-round knockout loss, even though he is ranked as the WBC’s No 1 contender.
“The reason I have to move up a weight now is because no one in my division wanted to fight me,” Khan said, though he made no mention of British rival Kell Brook who holds the IBF welterweight title.
“Mayweather let me down. Pacquiao let me down. Danny Garcia let me down. So I’m in a position where people don’t want to fight me, so I have to move up. I want the biggest fights.”
Khan is a big underdog as he steps up in weight to challenge Alvarez, who has been linked with a mega-money fight against middleweight king Gennady Golovkin later this year.
When asked if Alvarez would be unwise to overlook him, Khan said: “If I was Canelo, that would be the biggest mistake I could make.
“If he is looking far ahead, looking past this fight against me and looking at a Triple G fight, he will be making a mistake because I really believe I can beat him in this fight.
“If he loses against me I don’t think that fight will be there.”