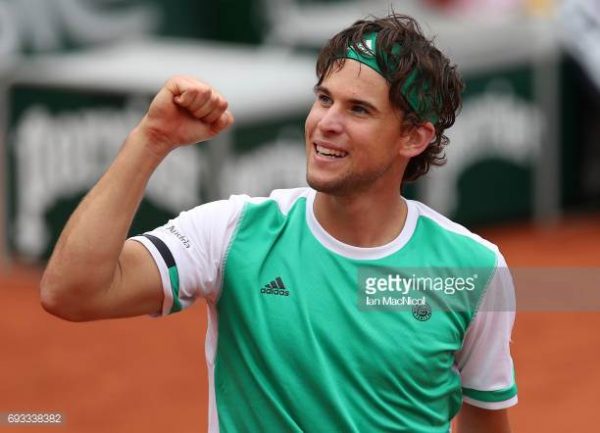 Karen Khachanov showed why he is one of the finest young talents in tennis on Saturday as he powered into the final of the Paris Masters.
The 22-year-old 6ft 6in Russian, already the owner of two indoor hard court titles this year, won 6-4 6-1 against Dominic Thiem.
He moved one step away from the biggest title of his career at the Bercy indoor arena, crushing his Austrian friend in 70 one-sided minutes.
Khachanov will now face his first Masters 1000 final on Sunday against the winner of the blockbuster second semi-final between Novak Djokovic and Roger Federer.
While Djokovic will be back to world number one on Monday, Federer is seeking a 100th career title.
Khachanov said: “It was one of my best matches, and what I’m happy about is that I was increasing my level, which shows that I’m becoming a better player.”
The 18th-ranked Muscovite overpowered a third top-10 player in successive days, having hammered Alexander Zverev in the quarter-finals and negotiated John Isner’s huge serves in the last-16.
Thiem, the world number eight who on Friday had booked his place in the ATP Finals.
He was out of sorts and seemed discomfited from the start by the depth and power of the groundstrokes he has seen so often from his regular practice partner.
Remarkably, the Austrian saw his powerful serve broken five times in a row by Khachanov at the end of the first set and throughout a surprisingly one-sided second.
He said: “It was really intense the first couple of games and at 4-4, when there was more pressure coming, I broke him and took the lead.”
Asked about the great player that he will meet in the final, he smiled and said: “I’m going to watch (Federer-Djokovic) definitely and any scenario is good for me”.
It was a hugely disappointing day for the 25-year-old Thiem.
He had reached the French Open final in Paris in June, but he is still searching for the first Masters title his talent merits.