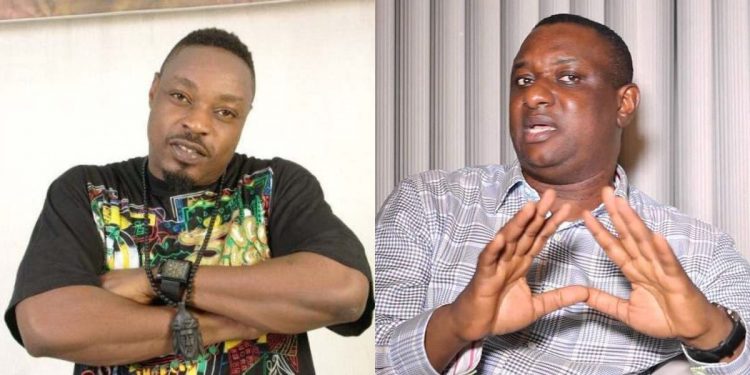 Minister of State, Labour and Employment, Festus Keyamo, has accused singer Eedris Abdulkareem, of attempting to blackmail him.

According to the Minister, Eedris released a song ”Jagajaga reloaded” to disparage him and the Buhari administration because his request to wax a pro-Buhari song was turned down. 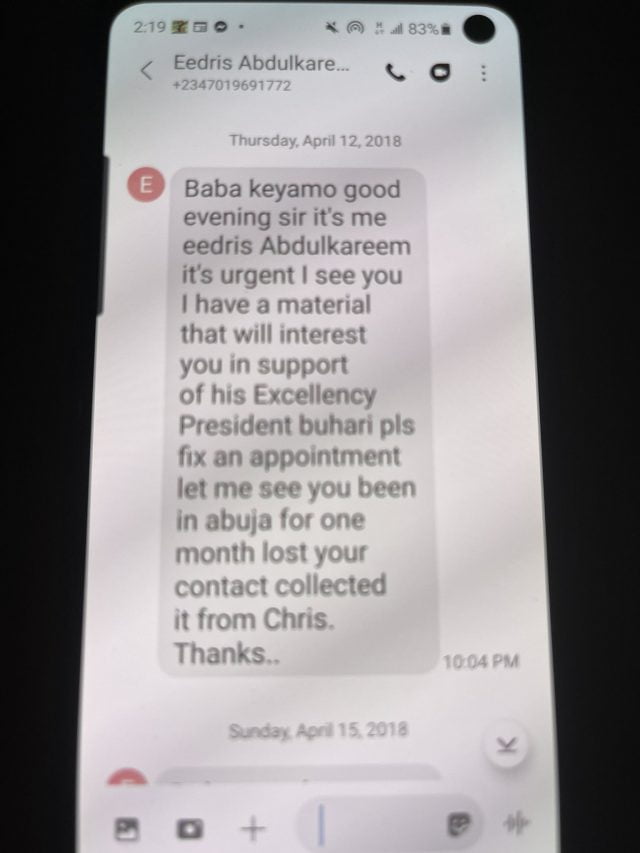 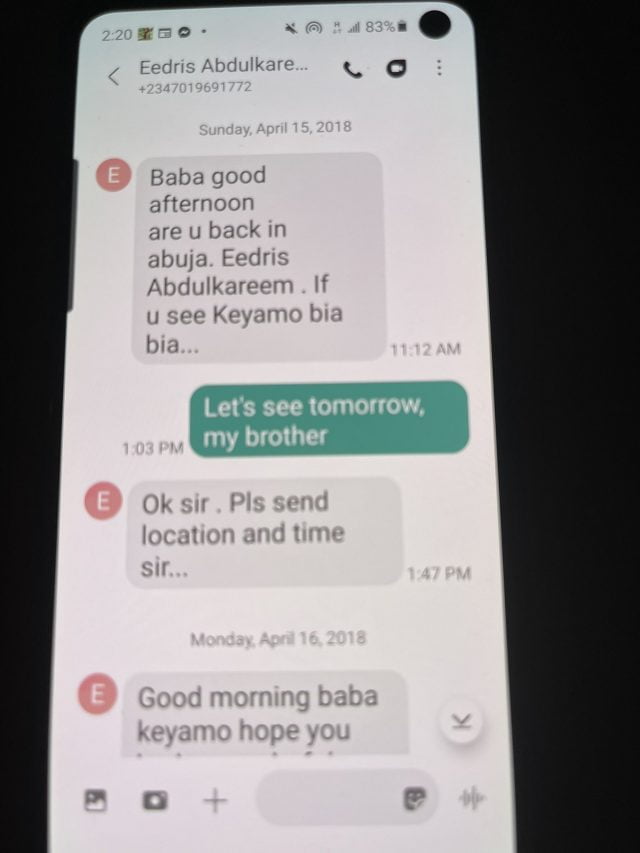 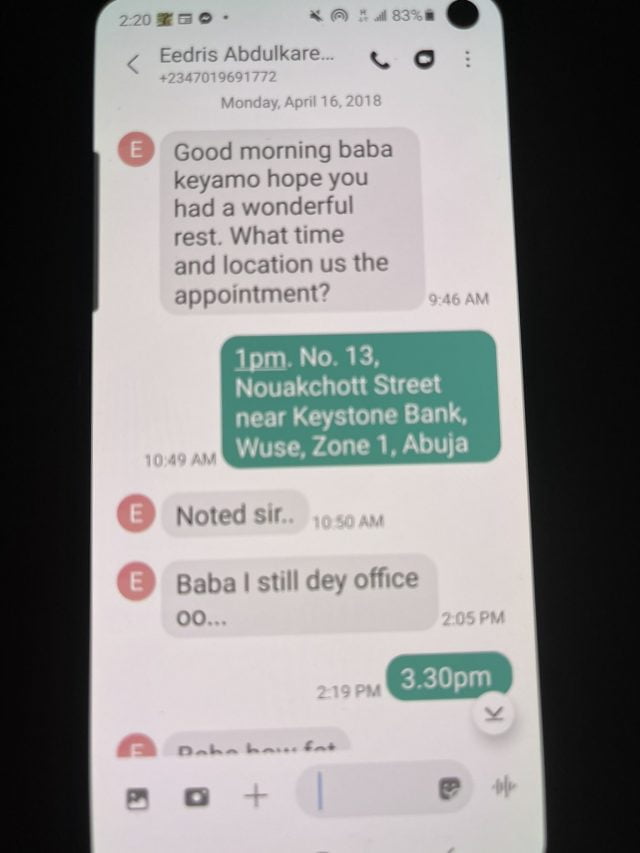 He also shared messages between him and someone he claimed is Eedris. 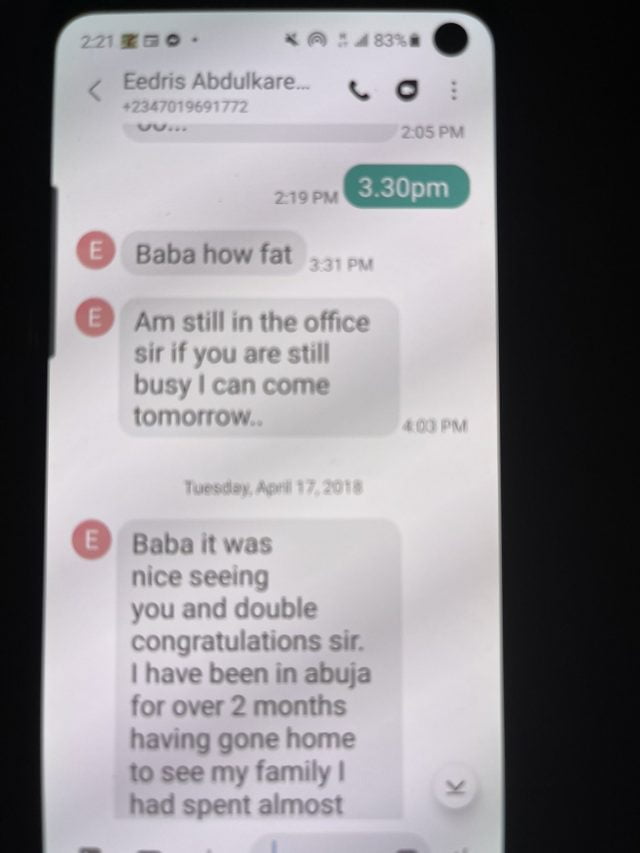 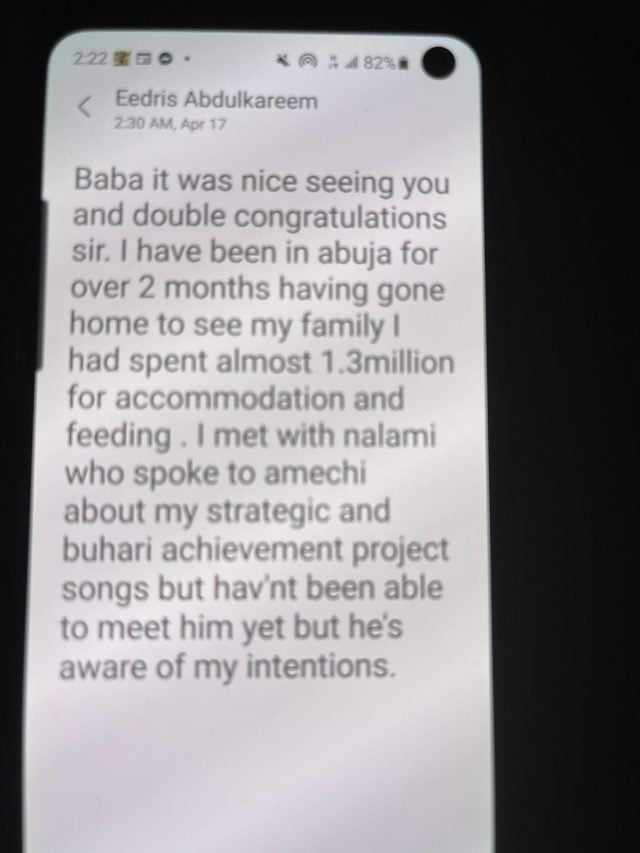 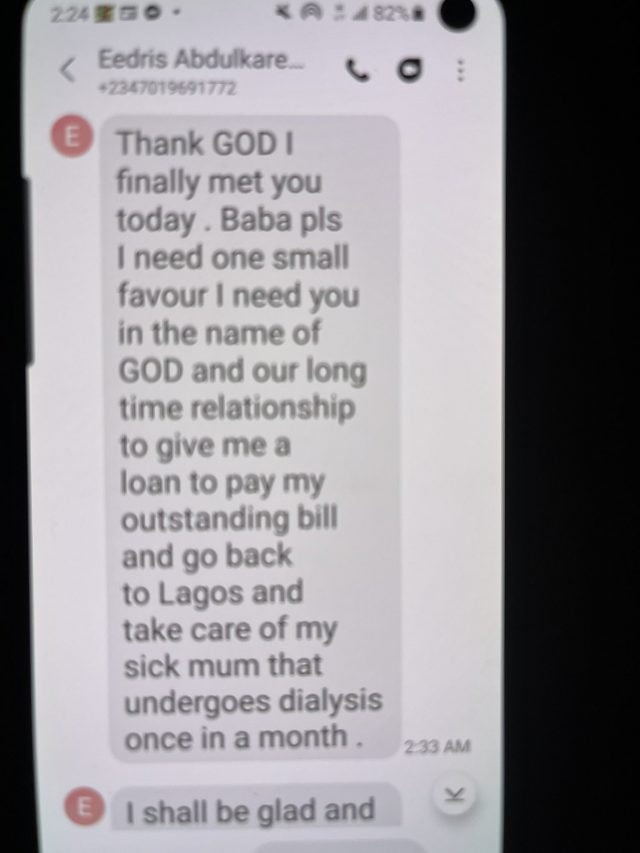 “I laughed out so loud and even danced to the rhythm too.

“In 2018, when I was named the Director of Strategic Communications for Buhari Campaign Organisation, Abdulkareem waxed a song in support of Buhari and wanted to join us, albeit for a fee.

“He then made desperate efforts to see me through text messages from his phone no. 07019691772

“When I finally met with him, I listened to the songs, but told him I had no budget for such or any for that matter.

“I explained that my job was voluntary. It was the same thing I told so many other so-called activists-by-day-and-hustlers-at-night who secretly approached me

“He then switched to the fact that he wanted a loan to pay for his hotel bills to the tune of N1.3m and to cater for his ‘sick mum.’

“That was already running into more than N3m.

“However, one govt functionary called me to say he told him another story that his child was sick

“He begged me to introduce him to Malami Amaechi & the SGF and to paint a good ‘PR’ for him.

“He pledged that he was with us in the campaign with his whole ‘body and soul’.

“But at this point, I knew he was a desperate hustler who could embarrass me, so I ghosted him.

“After our victory, he went berserk and joined every protest against the same Buhari whom he wanted to serve with his whole ‘body and soul’, but needed money to do so.

“Now, the latest is the ‘jagajaga reloaded’ that he has waxed to vent his frustrations at not getting into the system. 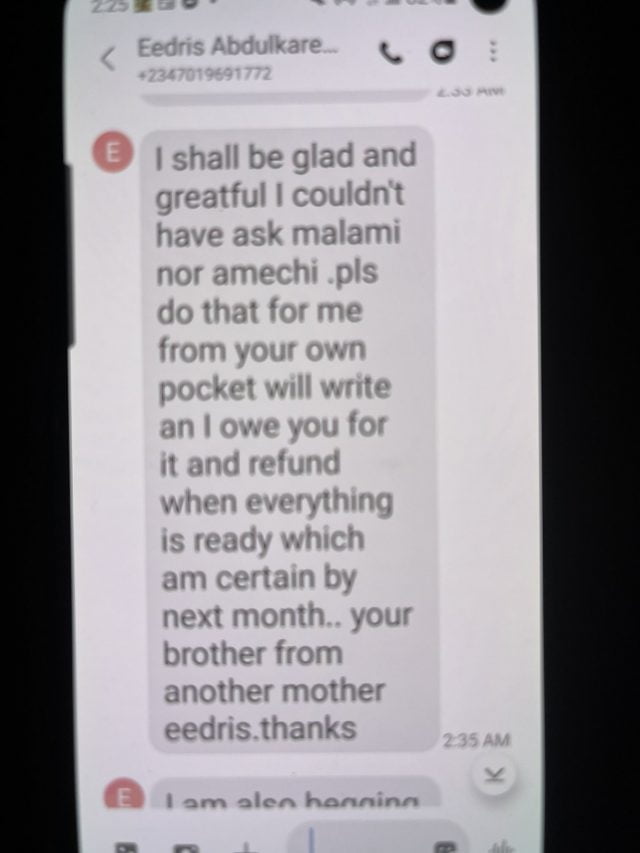 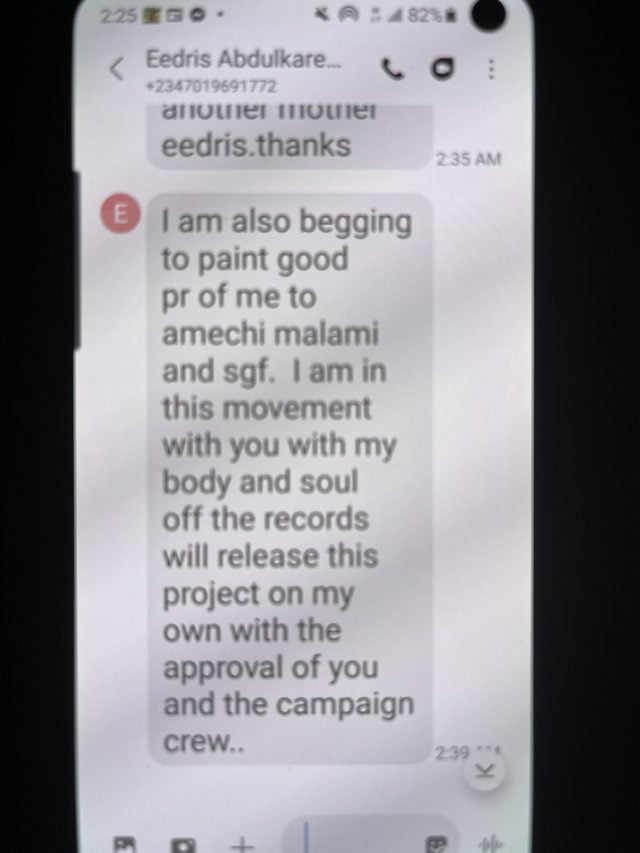 “His reference to me as ‘chopping’ reminds me of the gaffe of then Minister Sunday Afolabi who infamously said Bola Ige was invited to govt to ‘come and chop’!

“I wish to assure Eedris and any who think being in govt is tantamount to ‘chopping’, that for some of us (I can’t speak for others) it is just an honour to serve our country and an attempt to move from armchair criticism to a real participant in order to make a difference.

“Finally, we can all sit back and enjoy the ‘jagajaga reloaded’.

“One of the objectives of the song is to call me out since I ghosted him for attempted extortion – he has now succeeded.

“Another objective is to help promote the song by my reaction – that he has also achieved!”

Reacting to the accusations, the singer said that he stood by Keyamo when he was in prison and fought against former President Olusegun Obasanjo by releasing Jaga Jaga on behalf of all the comrades in prison.

He said, “When my mother was dying, I reached out to a brother, or one I thought was a brother and a comrade.

“Could he have helped, yes, did he help, NO…such was the wickedness of his heart that he munched and kept personal details for three years…real Hallmark of a Blackmailer!

“Thought he could effect change in the government he served.

“Then he joined the cabal, he became inner caucus and held the steering wheel spiralling Nigeria into doom.

“He joined to crush the revolution of the youths, he joined the cabal. 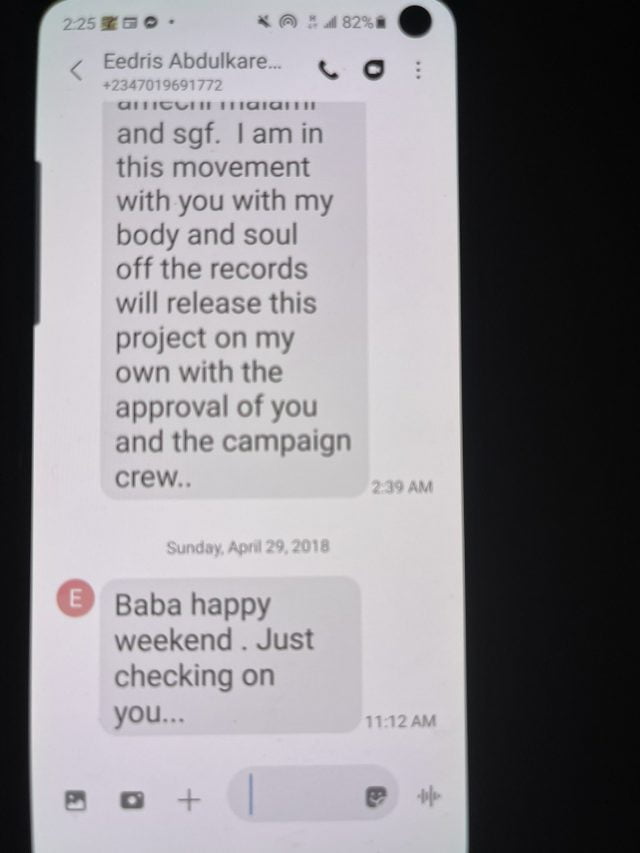 The cabal which mowed down our youths at LEKKI TOLL GATE.

“With a vexed spirit, I went again to the studio for “Jagajaga Reloaded” and the Blackmailer went to town.

“The cabal is awoken.

“The Blackmailer said I recorded a song for Buhari.

“Issues raised on Jagajaga Reloaded are facts. Nigeria never had it so bad.

The Jagajaga has taken a gargantuan dimension.

“We must keep asking questions. We must ask the cabal questions.

“He is in pains because his next ambition is to be governor of Delta State.

“Perhaps to localise grand looting, terrorism, murdering and raping of our citizens, kidnapping, which his cabal have romanticised and packaged as banditry, and sundry other mis-governance.

“This is why Jagajaga ti get e!

The Jagajaga reloaded is a four minutes song which featured other Nigeria artists like Nigga Raw.

The song also criticised the President Muhammadu Buhari administration which it described as a “democracy military” as well as the activities of the military during the #EndSARS protest.