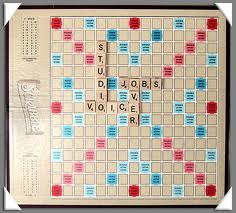 At the end of the proceeding of day one at the National Scrabble championships in Abuja, it has been a string of surprise results, with Moses Peter leading by winning all his seven games and massing a cumulative score of 579.

Behind him is Oshevire Awenagha who won six games with a margin of 669. Akanbi Dipo also won seven games with 375 margin to keep the top-three positions tight.
The catalogue of five wins has the following players and their margins. Isong Williams (368), Ojior Osikhena (363), Ehibudu Chux (330), Olowu Tokunbo (281), Oshodi Sunday (276), Ikolo Anthony (236), Curtis John (226), Balogun Rasheed (145), Ogedengbe Olawale (85), Saheed Tayo (64).
As it is, these forms the list of contenders and pretenders to the throne. Former African champion, Ikekeregor Dennis who was seen as an outsider to the throne remained in the cold. He finished 17th on the log with 4 wins and a margin of 573.
The immediate past national champion, Eta Karo surely is dethroned and cannot lay claim to his title as he ended up with 4 wins and a margin of 420 to be logged on the 18th strata.
The high game for the day was played by Auwal Ibrahim who scored 618.
Word highlights were Reddner (72) in the game between Moses Peter vs Jack Mpaka on table 1 in Round 4.
GROUSED fetched Jack Mpaka 70. Ustions (83) and Tummlers (82) in the match-up between Nsikak Etim against Tokunbo Olowu.
Greased (80) by Tokunbo Olowu. Leviatates (76), Enshrine (76) Objects (76) Ikolo Anthony vs Kabir Olaiya.
Getting (69) Kabir Olaiya, Outsmelt (73), Disgrace (89), Zeas/Awave (55) Dipo Akanbi vs Akpan Edward.
TOLUENE (59) by Akpan Edward. Cleanest (74), Naggiest (90), Entamed (77), Jerry Igwe vs Curtis John.
Isoetes (84), Foodies/Queyns (81), Avize (81) Oshevire Awenagha vs Kayode Fahola. Arietta (66), Boarding (62) by Kayode Fashola
Laureate (62), Escries (80) in the game between Hakeem Kareem vs Rasheed Balogun. (Escries was a phoney).
Scolices (86), Headages (88), Minaret (75), Feasting, Haedrigs Milages, Sheria, Fondling and Alunites were other words of interest played in the day.
Also in round 6, John Curtis amassed a whooping 141 points after playing ROUTeMAN, a times-niner, in a pulsating game with Charles Okoye.
Round two of the games starts at 9am today in Abuja.the nation waits to crown a new national king of the words.