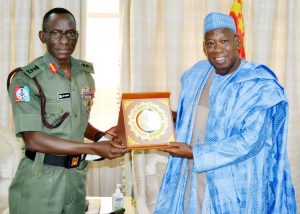 The Government of Kano State and the Defence Headquarters (DHQ), have resolved to further strengthen the ongoing efforts to tackle the activities of bandits in the state.
Gov. Abdullahi Ganduje of Kano State made the call when he paid a courtesy call on the Chief of Defence Staff, Gen. Lucky Irabor, on Thursday in Abuja.
The Acting Director, Defence Information, Brig.-Gen. Onyema Nwachukwu, disclosed this in a statement on Thursday, in Abuja.
Ganduje solicited increased support from the Armed Forces of Nigeria (AFN), in securing the state’s forest against banditry and other forms of criminality currently bedeviling the state.
He said that his administration was looking forward to stronger ties with the military in the area of security, particularly in securing the Falgore forest which he said had become a hideout for bandits and other criminals.
According to him, the nation’s forests are now havens for criminals, who after perpetrating their nefarious activities return to the forest reserves.
The governor commended the Nigerian Army (NA) for establishing a training centre in the Falgore forest, adding it would enable troops to take full control of the general area with their presence.
He also commended Irabor for the enhanced coordination and synergy among the defence and security agencies since his assumption of command as defence chief.
Ganduje, also lauded the cooperation and cordial relationship that exist among the military, other security agencies and paramilitary organisations in the state.
According to him, the state government is equally deploying technology to curtail insecurity within Kano metropolis, while community policing in the state is also yielding positive results as anticipated.
The governor expressed his condolences to the AFN on the demise of the late former Chief of Army Staff, Lt.-Gen. Ibrahim Attahiru and ten other personnel, as well as other fallen heroes of the AFN who paid the supreme price for the peace and unity of Nigeria.
In his response, Irabor expressed appreciation to the government and people of Kano state for the solidarity visit and condolences.
He reaffirmed the commitment of the military to support Kano and other troubled states in providing adequate security for law-abiding Nigerians, as well as foreign nationals.
The CDS also said that the military would continue to partner with Forest Guards towards securing the vast forests across the nation.
He also noted that the establishment of a training centre in Falgore Forest by the Nigerian army was intended to meet the security demand in the area.
He commended the Kano state government for providing requisite facilities and structures for the training ground.
The defence chief said that efforts had become a model, urging other state governments to emulate the initiative in order to secure the forest reserves in their states.
According to him, the AFN undoubtedly remains a veritable tool for the implementation of government policy in the national security architecture.
“We are more along the line of kinetic actions with minimal non-kinetic intervention,” he added.