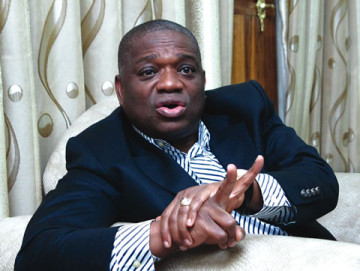 Share
Facebook Twitter LinkedIn Pinterest Email
Ex-Governor Orji Uzor Kalu will be the Guest Speaker at the Nigeria Bar Association lecture during its annual Law Week lecture series in Aba, Abia State on June 27.
The organising committee, in a statement on Sunday, said the NBA Law Week, which  commenced on June 24 with walk out and town hall meetings, will have its lectures delivered from June 27.
Kalu’s lecture, which will be on Tuesday at the Bar Centre, High Court Complex, Aba, is entitled: “The Role of the Bar and Bench in Fight Against  Corruption.”
The Chairman of the Law week Planing Committee, Perfect Okorie, said the branch  association was honoured that Kalu was the Guest Speaker.
Okorie said: “We are honoured and excited that former Abia State Governor, Dr. Orji Uzor Kalu, will be the Guest Speaker of the NBA lecture series this year to share with us the roles the bar and bench should play in terminating corruption.”
Each year, the NBA collaborates with iconic government leaders, major players in the economy, global business pundits as well as leaders in friendly law firms around the globe to host a conference that sees to the gathering of Nigerian lawyers and legal professionals.
Okorie said the chosen guest speakers are prominent scholars and personalities whom he revealed had in one way or the other contributed to the development and strengthening of the judiciary in Nigeria.
Similarly, Kalu has accepted the request of the authorities of Michael Okpara University of Agriculture, Umudike to deliver a lecture on the growing concern of the fate of the  Nigerian youth in the present and future educational system.
Kalu was invited to deliver the lecture titled: “Education of the Youth: Yesterday, today and in the future.”
The lecture will hold on June 29 at the University’s Pius Anyim Auditorium.
The lecture, which is the first of its kind  in the history of the MOUAU, is being organised by a coalition of students’ bodies and the Department of Management Science.
A statement by Kalu’s Special Assistant, Peter Eze  said the former governor, who is also an international business mogul and a leadership icon, has accepted the  invitation and will draw from his experience as an accomplished administrator to lecture the students.
Abia State Nigeria Bar Association Orji Uzor Kalu Peter Eze
Share. Facebook Twitter Pinterest LinkedIn Tumblr Email