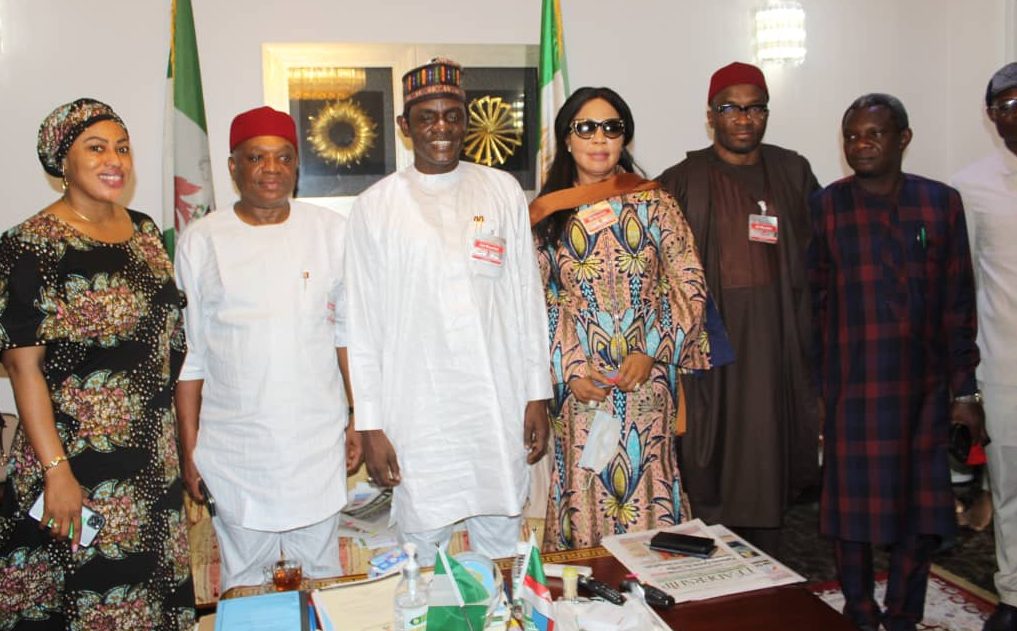 The Chief Whip of the Senate, Senator Orji Uzor Kalu, and members of the National Assembly South East Caucus elected on the platform of the All Progressives Congress on Monday passed a vote of confidence on the interim leadership of party, led by Yobe State Governor, Mai Mala Buni.

Kalu arrived the national headquarters of the ruling party by 12:30pm alongside other members of the caucus and proceeded to the office of the National Secretary of the committee, Hon. James Akpan Udoedehe, for a brief meeting before heading to the official residence of the Yobe State Governor.

Kalu had during the meeting extolled the leadership qualities of the Buni-led committee.

The Chief Whip also called on Buni to promote transparency in the party’s activities.

“It is easier to win election with popular candidates.

“It is difficult to win elections when people are imposed.

“We should avoid imposition of candidates.

“The caucus of the South East APC wants to congratulate you, to enjoin other party members and to reassure you that we are going to work with you.”

Speaking further, Kalu reassured the Chairman of the South East APC’s commitment to improve its performance in subsequent elections in the zone.

He said: “I want to specially congratulate and to tell you that we are solidly behind you and we shall support you in your quest to do everything transparently.

“It is important to have transparency in our party congresses.

“This will make the party have a big footing in the area.

“We assure you that we from the South East shall do better in the next election than we did in past election.

“We believe that with your honest leadership, the party will go to further heights.

“How I wish you are not the Governor of a state, we shall not be looking for another National Chairman because we have trust in you and I know you very well and even your  capabilities.”

Also speaking during the meeting was the Deputy Chief Whip of the House of Representatives, Hon. Nkeiru Onyejeocha, who advocated for the  encouragement and inclusion of women in the party’s activities and elective positions.

Onyejeocha said: “We are going to embark on constitutional review and I want you to use your office to ensure that you carry everyone along because there is no way we can continue living the way we are living.

“Women are helpmates to the men and in politics if we don’t have enough women coming up on board, that means we are not doing what God says.

“From my experience, women don’t have the strength that the men have.

“So if we continue to leave the constitution the way it is, there would be discrimination.

“So we appeal that you give the women more number of slots.”

Spokesman of the House of Representatives, Hon. Benjamin Kalu, lauded the Chairman’s efforts in the formation of the special tripartite committee, which consists of the members of the party drawn from all arms of Government.

He emphasised that the committee would serve as mechanism to resolve issues internally.

He said: “We the APC members of the House are in absolute peace, which is very important to what you want to achieve.

“The leadership of Femi Gbajabiamila is great and we are all carried along.

“Let us also commend you for spearheading the formation of the tripartite committee, which consists of all the arms of Government.

“With this tripartite committee, we can resolve issues internally before any matter that can dent the image of the goes out to the public.

“I very much commend commend the role you have played.

“I also commend your reconciliation efforts.

“I also love the fact that you talked about reconciliation in Imo State, though Senator Orji Kalu has been championing it.

“For the party to expand and grow in the South East, we need the reconciliation in Imo State.

“So please extend your reconciliation efforts to the South East.

“This will help us win more states.”

He restated the committee’s willingness to work with the South East caucus.

He extolled Kalu’s efforts and contributions to the party’s growth and urged him to continue his good work for the party.

He also called on women to take up the responsibility of contesting in elections rather than waiting to be given such positions.

Buni said: “I disagree because most times our sisters will come from the position of weakness.

“In APC, there was a time we decided to give free nomination forms to women.

“But there was a very superior argument that came up, which said that the women should come from the position of strength because you can pay for the forms just the way a man can also pay.

“When we are talking about democracy, democracy is about contest.

“You have to contest.

“There are more women that I know that perform more than men.

“Even in the National Assembly, you can attest to that.

“There are capable hands.

“Even in my state there has never been a time that we didn’t have a woman at the House of Representatives and they are performing and most times even better than men.

“You can see as none of them ever came from the position of weakness.

“They contest, win elections and even have more followers than men.

“Sometimes what they go out to do for the vulnerable out there, men don’t even care to do that.

“So when we are talking about gender issue, we have to be more pragmatic.

“We have to come from the position of looking for ways to encourage women to participate in politics.

“But when it comes to appointment, I agree with you.

“Appointment is something that either the President, Governor or a local government chairman can do, but it’s not about election, but when it comes to election, I know you won your election.

“I have been following you up and I see you travelling all over canvassing for votes.

“You didn’t sit in the comfort of your bedroom claiming you are a woman.

“Unfortunately, that is how some women think it should be to be given leadership slots on the basis of just because they are women but it’s not the way it should be.

“We have to encourage them to participate and to give them a level playing ground and as a party that is what we are expected to do.

“I also align with your quest to push for the inclusion of more women in party committees and certain processes.”

Other lawmakers who spoke were Chinedu Ogah of Ebonyi Central Senatorial District and Princess Miriam Onuoha of Okigwe Senatorial Zone.