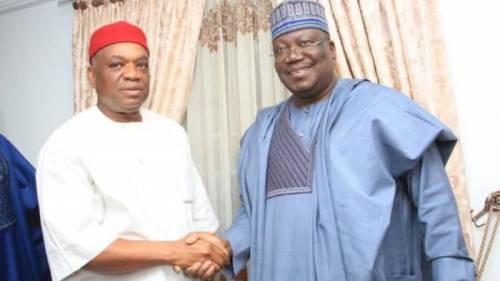 Acknowledging the invaluable contributions of the Yobe State-born politician to nation building in various capacities, Kalu commended the President of the Senate for his exemplary leadership qualities anchored on fairness and equity.

Extolling the virtues of the Senator, the former Governor stressed that the 9th Senate under the watch of Lawan has sustained giant feat in its duties and responsibilities.

Kalu urged politicians to emulate the outstanding leadership qualities of Lawan, adding that the President of the Senate, has over the years sustained his goodwill among his colleagues, followers and contemporaries.

The Chief Whip of the Senate made these assertions in a goodwill message to commemorate the 62nd birthday anniversary of the President of the Senate.

Kalu said: “On behalf of the good people of Abia North Senatorial District, I extend my warm greetings to the President of the Senate, Senator Ahmad Lawan as he clocks 62.

“Mr President of the Senate, your good works in public service over the years, have earned you robust goodwill among Nigerians.

“The contributions of the national assembly to nation building couldn’t have been possible without your inclusive and participatory leadership approach.

“As you continue to complement the efforts of President Muhammadu Buhari in advancing the cause of Nigerians, I am confident that the country will attain greater heights.

“On this occasion of your birthday anniversary, it is my prayer that God will grant you longer life and wisdom as you serve the nation.”

I won’t drink water used to bath my late husband, widow cries out