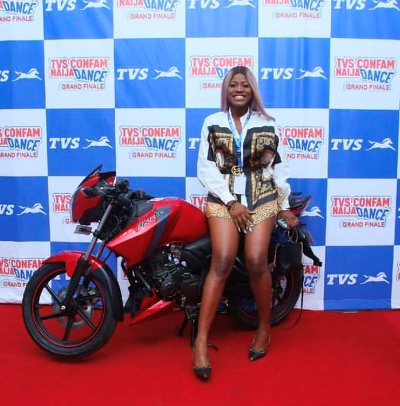 Nigeria’s dance queen, Kafayat Shafau, aka Kaffy, musician, Micheal Addo, aka Small Doctor and BBNaija season three finalist, Alex Asogwa, a.ka Alex Unusual, drilled contestants on Wednesday as judges for the TVS dance competition finale.
The trio who were also joined by head choreographer for the defunct Psquare group, Nonso Cajenta, aka Don Flex and comedian, Bethel Njoku, popularly known as Senator thrilled the guests with their dancing skills.
Kaffy, who is a Guinness world record holder for the longest dance party, showed off some of her intricate dance steps as the event warmed up.
This was followed by a little thrilling dance moment by Alexunusual that elicited loud cheers from the crowd, most of whom followed her dancing sprees in the BBNaija house.
Meanwhile, ‘Penalty’ crooner Small Doctor kept the crowd on their feet as he performed his hit songs.
The News Agency of Nigeria reports that the competition tagged ‘TVS CONFAM NAIJA DANCE’, had been trending online for about a month with contestants sharing videos of themselves displaying creative dance steps in front of tricycles or motorbikes.
According to the organisers, “the competition aims to find the most creative dance routine from supporters all over Nigeria” and to also empower the youths.
17 contestants from all over Nigeria were left to compete in the finals, after they were screened and chosen from the lot of applicants.
The winner, who is yet to be announced officially, will be awarded a cash prize of one million Naira.
The first runner will pick up two hundred thousand naira and the second runner up, one hundred and twenty five thousand naira.