JUST IN: Workers comply as NLC protests in Kaduna 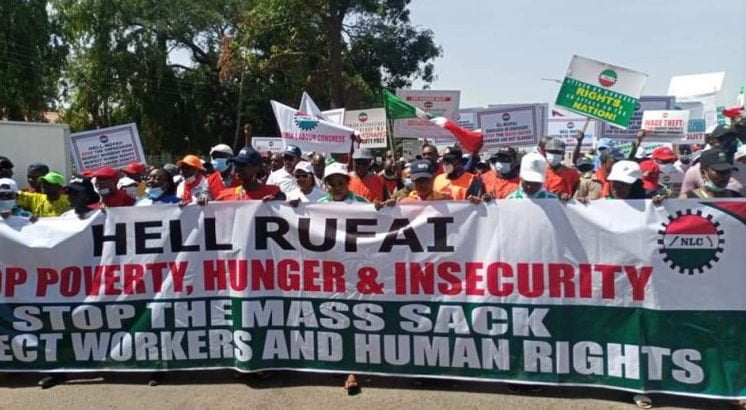 There was high level of compliance among workers on Monday, as the Nigeria Labour Congress (NLC) commenced streets protest and enforcement of its five-day warning strike in Kaduna State.

Members of the labour movement led by the NLC President, Comrade Ayuba Wabba took to the street around 9:40am on Monday to protest what they called anti-labour policies of the Kaduna State government.

The first point of call of the protest which started from NLC secretariat at Race Course road was the Kaduna State Secretariat, where Comrade Wabba addressed the workers on the essence of the strike action.

The protesters thereafter headed towards the state House of Assembly.

Before the arrival of the protesters at the state secretariat, the main gate of the complex was under lock and keys, while workers were seen hanging outside.

However, when the gate was later forced open by the security personnel, the workers remained outside in what looked like compliance with the NLC directive.

The NLC is protesting mass sack of workers by the Kaduna State government from the civil service.

The state government has however insisted that it would not be intimidated by the strike to shelve its plan to rightsize its workforce.

Meanwhile, as a result of the warning strike, Kaduna has been thrown into darkness by the electricity workers union, supply of petroleum product cut by NUPENG, and aviation and railway workers also shut the Kaduna International Airport and the Kaduna-Abuja train service.