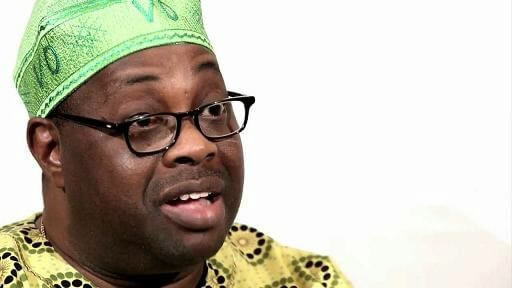 Veteran journalist and former presidential candidate, Chief Dele Momodu, is set to launch three separate books in commemoration of 25years of annulment of the June 12, 1993 presidential election and the 20-year anniversary of Chief Moshood Kashimawo Olawale Abiola’s passing on July 7, 1998.
A statement issued by the celebrated publisher of Ovation International on Wednesday disclosed that the launch of the books will take place on July 10, 2018 at the Nigerian Institute of International Affairs, Lagos.
The first two books, authored by Chief Momodu, document his quintessential journalistic works over the past three decades.
The first book, titled: “PENDULUM: The Writings of Dele Momodu Vol I,” is edited by seasoned journalist, Dr. Reuben Abati.
The second book, titled: “PENDULUM: The Writings of Dele Momodu Vol II,” is edited by Prince Damola Aderemi.
The manuscript for the first book was ready in 1997 and the introduction written by Dr. Abati in the same year.
The foreword to the second book was written by Lieutenant General Theophilus Yakubu Danjuma.
The third book, titled: “FIGHTING LIONS,” is the untold story of the Dele Momodu presidential campaign.
The book is authored by Ohimai Godwin Amaize, who was appointed Chief Momodu’s presidential campaign manager in 2010 at the very young age of 26.
In his introduction to “PENDULUM: The Writings of Dele Momodu Vol I,” Abati gives a compelling narrative on Momodu’s exit from Nigeria to exile in the United Kingdom in the dark days of the Abacha regime.
Abati wrote: “He had to flee Nigeria in 1995, when the rumours and charges became insistent that he was one of the brains behind Radio Freedom International (later Radio Kudirat), the pro-democracy, underground radio which continues to challenge the annulment of the Presidential elections of June 12 1993, and the detention of its undeclared winner, Bashorun M.K.O. Abiola. One of the charges against Momodu was that he was too close to Abiola and too involved in the struggle for June 12. Momodu moved several steps ahead of the intelligence service, and escaped through neighbouring Ghana. The truth, as he later confessed, is that a friendly security agent had advised him to flee. In Nigeria, anything is possible. How Momodu got to this stage in his career is in part the content of this book. How Nigeria became in the 90s a country where the best and the brightest head for the border to escape imprisonment, or frustration or poverty: How the best and the brightest, not wanting this option choose the alternatives of fraud, deception by all means, abandonment of principles, cynicism and anger: How Nigeria in the 90s became a playfield of hate, assassination, murder, power-rage, an atomistic society, adrift, lost, and depleted: that is the focus of this book.”
On his part, Danjuma recognized Momodu’s exceptional contributions to the Nigerian media in his foreword to “PENDULUM: The Writings of Dele Momodu Vol II.”
He wrote: “When the story of the revolution that ushered in a new political day in Nigeria is eventually told, none of the main dramatis personae would forget the sterling roles played by the ever-vibrant Nigerian media. But among the largely fair and patriotic reportage and analyses that really made a huge difference, the efforts of few journalists stood out. Dele Momodu’s column, Pendulum, published every Saturday by ThisDay, is among these outstanding few. Not only has this column over the years helped set many a national socio-political agenda, it has become the virtual weekend tonic for millions of Nigerians for its forthright, often unabashed opinions about varied national and international issues.”
The foreword to FIGHTING LIONS was written by Dr. Doyinsola Abiola, Chief Abiola’s wife and Momodu’s former boss.
In the foreword, Dr. Abiola wrote; “FIGHTING LIONS, the compendium of DELE MOMODU’s unique presidential campaign brings back memories of another, closer to home, presidential campaign of MOSHOOD KASHIMAWO ABIOLA’s titanic HOPE ’93 presidential campaign. The major difference is that Dele lives to fight another day while KASHIMAWO, the 13th, AARE ONAKAKANFO of Yorubaland, who, true to his chieftaincy legend, died in the fray. But history will treat both friends kindly because they dared to fight lions even in their dens. They will not be classified as “those cold and timid souls who neither know victory nor defeat”. They fought a good battle, with the help of equally unsung campaign teams which gave their all to their respective campaigns.”
Celebrated author and Chairman of the Editorial Board of Thisday Newspapers, Olusegun Adeniyi, will deliver a review of “PENDULUM: The Writings of Dele Momodu Vol I” at the book launch in July.
Respected columnist and Publisher of TheCable, Simon Kolawole, will review the second volume of the book while the Managing Director of Arise News Channel, Ijeoma Nwogwugwu, will review FIGHTING LIONS.