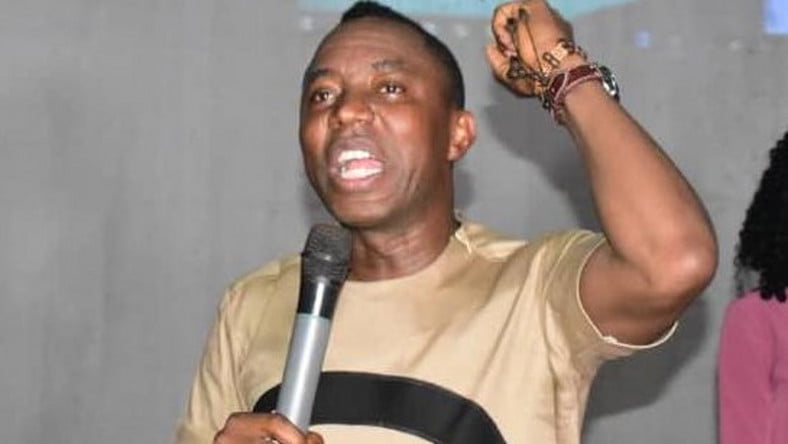 The court proceedings leading to an order releasing the Sahara Reporters Publisher and the presidential candidate of the African Action Congress in the 2019 elections, Omoyele Sowore, should raise genuine concerns whether the gravity of the offences for which he has been charged justifies his release on bail. It will be recalled that Sowore had been in the lawful custody of the Department of State Services for 45 days following his arrest on August 3 for planning a nationwide protest, tagged: #RevolutionNow. A day before the expiration of the period of custody, the DSS charged him with offences of treasonable felony, money laundering, terrorism and plots to overthrow President Muhammadu Buhari.
A Federal High Court sitting in Abuja, which heard arguments for and against the release of Sowore, ordered his immediate release to his lawyer, Femi Falana, after ruling that there was no longer a valid reason to continue detaining the respondent. The prosecution counsel argued that Sowore was charged with a capital offence, conspiracy to commit treason, which by the provision of the constitution in section 161 could only be admitted to bail by a judge of a higher court under exceptional circumstances. It added that in the interest of justice and national security, the court should make an order that the bail or otherwise of Sowore be determined by the court that will hear the criminal trial.
Although the Constitution in Section 39 provides for the freedom of expression, such freedom is not absolute and it comes with its own limitations. Whether the actions of Sowore fall within such limitations will be decided by the court in due course. However, if freedom of expression is left unfettered, it is certain to be abused. Nevertheless, any restriction on a right prescribed by law must be respected by the courts to enable a person know in advance what not to do and the consequences of such disobedience. Were law to confer unfettered exercise of the right of expression, such right would be subject to serial abuse, which may result in societal anarchy.
Laws ought to create a sense of responsibility on the part of citizens, government officials and law enforcement officials to enable them to know how to regulate their conduct. The supervisory functions of the courts in this regard oblige them to pay utmost attention to the principles applicable not only to dissemination of ideas and information that are favourably received or regarded as inoffensive but also to those that are considered offensive or detrimental to the peace and order of the State.
Unfettered expression of ideas may cause serious harm, hatred or contempt or excite public disaffection or incite or instigate violence or threats within or against the State. It is constitutional to discuss any grievance within the polity and criticise government policies so long as such criticism is within the limits of freedom of expression. Loose expression of views that are more particularly followed by untoward acts targeted at the volatility of a nation tend to cause general disaffection and affect the public peace and public safety.
A responsible government does not have to wait until such action has found sufficient grounding before it can take steps to curtail it especially in these days of unfettered, anti-social manipulation of social media. Any government that delays action against the mismanagement of public space in an attempt to allow freedom of expression does so at its own peril.
That is why it is provided in S. 39 (3) and S. 45 (1) of the Constitution that the provisions of S. 39 would not invalidate any law that is reasonably justifiable in a democratic society. Nothing in sections 37, 38, 39, 40 and 41 of the Constitution shall invalidate any law that is reasonably justifiable in a democratic society in the interest of defence, public safety, public order, public morality or public health; or for the purpose of protecting the rights and freedom or other persons.
It is instructive that the Abuja court held that since the charges of terrorism had already been filed against Sowore, he must deposit his international passport and other travel documents to the court to guarantee his availability for trial, an indication of the risks to national security and evasion of justice. Yet it went ahead to hand him over to his lawyer!
This recalls the Nnamdi Kanu of the proscribed Indigenous People of Biafra bail episode and the granting of medical leave to Islamic Movement in Nigeria Leader, Ibrahim El-Zakzaky, when courts caved in to undue pressure to grant supposedly justified bail only to end up in fiascos. The judiciary should not play to the gallery of media hype and other populist posturing in considering cases involving national security issues. National interest should not be trivialised.
. Rufus, a political affairs analyst, writes from Warri, Delta State.