Joshua: I’ll be a legend overnight 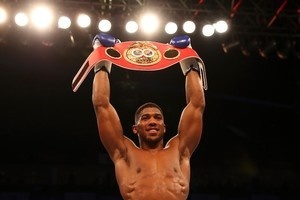 Share
Facebook Twitter LinkedIn Pinterest Email
IBF world heavyweight champion, Anthony Joshua, has admitted that he is desperate to overcome Wladimir Klitschko next year to seal his status as a boxing legend.
The 27-year-old will take on the former world champion at Wembley Stadium in April 2017 in a fight already estimated to be worth a staggering £42 million, with close to two million people – including 90,000 inside the famous ground – expected to watch on.
Joshua’s third-round stoppage of Eric Molina on Saturday night took his record to 18-0, with all of those ending in knockouts, but the unbeaten Brit is now prepared for the biggest fight of his life in four months‘ time.
“This is a fight that can change me from champion to legend overnight,” he told reporters. “To knock him out would be the cherry on the cake, but to win whichever way, I think is very possible.
“It’s the fight that will get the masses out and draw massive attention and they’re the type of fights that can change the way that people view you in your industry.
“Right now, I am IBF champion of the world but now it’s about me beating the right people to go down in history. But it’s not about doing it once, it’s doing it over and over again. This is the start of that legendary campaign.”
Olympic gold medallist Joshua has successfully defended his title twice before, having also defeated the previously unbeaten Dominic Breazeale during the summer.