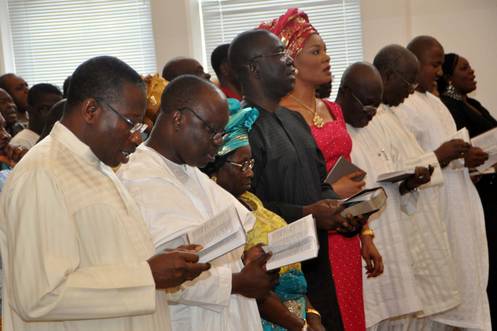 President Goodluck Jonathan on Sunday joined the rest of the world to celebrate this year’s Fathers’ Day, calling on Nigerian fathers to discipline their children when they err.
Jonathan equally told state governors that even when the punishment for any offence committed is death sentence, they must do their part by signing, since this remained the law.
He was speaking at a special service to mark the Fathers’ Day at the Aso Villa Chapel, Abuja.
The President insisted state governors must always sign death warrants when the need arises in the case of capital punishment, even though it could be painful.
As breadwinners, he said fathers must always strive to provide for children, show them love but must not be found wanting when it is time to call them to order.
"Today is Father’s Day and that is why we are here to celebrate.
"Who is a father?
"If we look through all the references that have to do with the father in the Bible, you will see that we expect a father to show love.
"The father is the breadwinner of the family to take care of the mother and the children, to provide food for them and take care of their education.
"We expect fathers to be role models where children will want to be like their fathers.
"I want to urge all of us who are fathers to discipline our children.
"No matter what you do, even if you show love and provide the needs of the family, if you don’t discipline your children, it is not good.
"These days, because of modern life, discipline is almost gone. Discipline can be in various forms.
"In the states, it could be admonition.
"Magistrates can just admonish and allow him (an offender) to go.
"From admonition to various forms of punishments.
"It could be imprisonment.
"The extreme is capital punishment.
"If in the case of capital punishment, the state governors will sign.
"Even governors sometimes find it difficult to sign.
"I have been telling the governors that they must sign because that is the law.
"The works we are doing have a very sweet part and a very ugly part and we must perform both.
"No matter how painful it is, it is part of their responsibilities.
"So for us as parents, it is important for us to let our children constantly know that it is good to take the right path.
"It is good for them to know that they must be upright."
In his sermon, the President of the Church of Christ in Nigeria, Rev. Soja Bewarang, enjoined those working with the President to be dedicated and refrain from stealing public funds.
The sermon was titled: "Fathers’ responsibility."
Bewarang said: "If this country must survive, all men working under the President must practice honesty and they must not steal.
"He (the President) cannot fight corruption when you are not supporting him.
"He may try, but he cannot be everywhere.
"You are his representatives, so you must practice honesty and you must not steal."
President Jonathan received gifts of a guitar and mobile handset from the organisers of the event under the leadership of Ndudi Elumelu to commemorate the day.
The special guest at the service was Governor Emmanuel Uduaghan of Delta State.
In attendance were the President’s mother, Eunice; Governor Godswill Akpabio of Akwa Ibom State; Deputy President of the Senate, Ike Ekweremadu; his wife; the Chairman of the Board of Trustees of the Peoples Democratic Party, Chief Tony Anenih; members of the Federal Executive Council; new Controller-General of Immigration, David Paradang; Commandant-General of the Nigeria Security and Civil Defence Corps, Dr. Ade Abolurin; and members of the National Assembly.
Others were the Ambassador of Ireland in Nigeria, Patrick Fhearghail; the Israeli Ambassador to Nigeria, Uriel Palti; former House Leader, Tunde Akogun; Ndudi Elumelu; and Nollywood stars among others.