Jonathan to Arewa: I will implement confab report soon 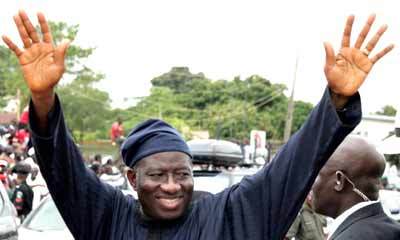 President Goodluck Jonathan heaved a sigh of relieve in Asaba, Delta State on Saturday as the Arewa Initiative for Co-Existence in Southern Nigeria unanimously adopted him for re-election.
The group made Jonathan its sole candidate in the forthcoming presidential election.
The group, which mobilized its members from across the 17 states South of the federation said the President represents a united Nigeria.
The states mobilised to Asaba, the Delta State capital, were Delta, Anambra, Enugu, Ondo, Ekiti, Imo, Bayelsa, Akwa Ibom, Cross River, Rivers, Edo, Ogun, Oyo, Osun, Lagos, Ebonyi and Abia.
The group was led by a former Governor of Sokoto State, Alhaji Attahiru Bafarawa, who is the Jagaban Yan Arewa Southern Nigeria and the chairman of the occasion.
Bafarawa urged the President to remain unperturbed by the antics of his detractors who are scheming to unseat him.
Bafarawa addressed the mammoth crowd of supporters and members of the group at the Cenotaph in Asaba, venue of the ceremony.
He was flanked by Jonathan’s Campaign Director-General, Senator Ahmadu Ali; the former National Chairman of the Labour Party, Chief Dan Nwanyanwu; and the host Governor, Dr. Emmanuel Uduaghan.
Bafarawa referred to the President consistently as Mainasara, assuring him of massive votes from members of the group.
According to him, President Jonathan had in the past four years favoured the Northern part of the country through his educational, health, agricultural giant strides and has evenly distributed political appointments across tribal divide.
In their separate remarks, Alhaji Danlami Isah, the Ibadan Zonal Co-ordinator (South-West), who moved for the endorsement of the President as the sole candidate of the group, before it was adopted on behalf of the entire members by Alhaji Gidado Saddik, the Sarkin Fulanin Akwa Ibom, appreciated the President’s transformation agenda, which he said has impacted positively on Nigerians, irrespective of their ethnic nationality.
The Zonal Co-ordinator of the group (South South region), Alhaji Musa Saidu, who condemned the insurgency in the North Eastern parts of the country, lauded the undisturbed manner in which the President has handled their attacks, maintaining: “Arewa people are not terrorists. Boko Haram is a not the making of the Northern part of the country but a global phenomenon.”
Obviously overwhelmed with joy, President Jonathan, supported by his deputy, Namadi Sambo, and the National Chairman of the Peoples Democratic Party, Alhaji Adamu Mu’azu, promised to sustain Nigeria as an indivisible entity if re-elected on March 28.
He said: “I don’t discriminate. I am one person that believes in one Nigeria. There is no reason why we should discriminate among ourselves. Some angry people say they can bring peace to this country but I still don’t know how somebody who is angry can do that. I still don’t know also how angry people can bring the desired change. These were people who boycotted the just concluded national conference.
“I don’t know how. We must not allow any politician to divide us as a nation. Many of them have sent their children and family abroad but waiting to use us tools to divide the country.
“In the next four years, we will make sure we implement the report of the national conference. PDP believes in one Nigeria, so believe one Nigeria, believe in me and vote me back.”
The President, who recalled how he built the Almajiri schools in the North, approved federal universities to complement the existing ones and make the railway to work again after decades of being moribund, vowed to do more if re-elected.