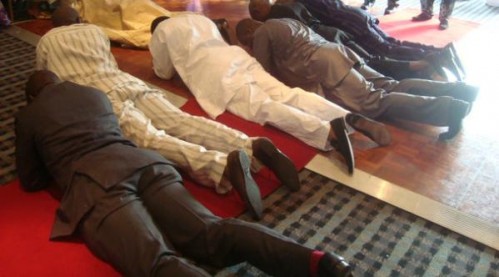 Governors elected on the platform of the Peoples Democratic Party on Thursday prostrated to beg former President Olusegun Obasanjo for a thaw in his face-off with President Goodluck Jonathan.
The governors, who met with Obasanjo in his home in Abeokuta, the Ogun State capital, had, before going into a closed doors meeting, prostrated for the former president.
The governors were led by the Akwa Ibom State Governor and Chairman of the PDP Governors Forum, Barrister Godswill Akpabio.
Others in the team were Governors Babangida Aliyu of Niger State, Sule Lamido of Jigawa State, Isa Yuguda of Bauchi State and Liyel Imoke of Cross River State.

The governors, who arrived at about midday, met with Obasanjo for about three hours.
Obasanjo, after the meeting, however, said there was no face-off between him and Jonathan.
He said the perceived face-off due to some of his scathing criticism was for the better of the country.
The governors were said to have in the main pleaded with Obasanjo to forgive Jonathan for whatever offence he may have committed and support his re-election bid.
In the last few weeks, the leadership of the opposition had visited Obasanjo several times, raising the fears that he may throw his weight behind the opposition All Progressives Congress in the 2015 elections.
Obasanjo said after the meeting: “They (governors) were concerned about what you may call the situation of the nation – security and economy.
“I have raised most of what we discussed in my own public pronouncements in recent times, not to castigate anybody, not to bad-mouth anybody, not to run anybody down, but out of genuine concern for the situation of this country and that is the same thing that brought them and I want to thank them.
“When we looked at these issues closely, very objectively, we came to the conclusion that we have a bad situation, but not irredeemably bad.
“Something can still be done and what now is required is the will and the courage to do something when and how it needs to be done.
“We agreed on that.
“I appreciate their coming to me because of the respect and honour they have for me.
“This task is not for one man and it is not even a task for one group.
“It is a task that requires all hands on deck and as they have said and assured me, they will hold this type of consultation with other leaders in the interest of this country, which is ours and for which we have no alternatives.
“The other day, somebody told me he knows NADECO route, but I do not want to follow NADECO route.
“It is incumbent on us to do what is right.
“With men like them, who are colleagues with whom I have worked, they will like to call themselves my sons.”
Speaking on the falling price of crude oil, which is the mainstay of Nigeria’s economy, Obasanjo said: “I am never scared by anything, but I am concerned that firstly, when we had surplus, we did not remember the rainy day.
“Now that the rainy day is staring us in the face, we must be honest and courageous enough to do what is right, to let the nation know and then to take the steps that will put it right as quickly as possible.
“And you do not need to be an oracle or a World Bank expert or an International Monetary Fund expert to know that our economy is not what it should be.
“And this is not the first time we would hear it.
“We have had it in the past when of course I came in in 1999.
“The price of oil was about $9 and we realised that we had a problem.
“We even made budget that we could not fund but we realised that we were in a serious situation and we took steps.
“Within two to three years, we were able to sail through.
“The price of fuel started moving up.
“Do not forget that there was a time during the Iraqi war, price of fuel rose to $42 and then it came down to $9.
“The one that we have now, we do not know when it would bottom and at what price it would bottom, but we can weather the storm if we take measures that we should take and when to take it.”
Akpabio on his part said they decided to visit Obasanjo because of the role he played in the emergence of the current democratic experience.
He said: “So, we decided that it is important for us to come and consult with him.
“As he said, pay our respect, discuss the affairs of the nation and then to tap from his wealth of wisdom.
“The intention here is that all Nigerians are determined to reposition the country.
“We have no other country than Nigeria and so no matter the challenges we may face today, we must work together as a team to redeem the situation.
“I want to thank our dear leader for receiving us and for what he said that the situation is redeemable and that we must also consult other leaders and work to ensure that the country is redeemed.”
Aliyu said: “We have come to consult with the oracle of leadership and politics of this country and we have benefited tremendously with our coming.”