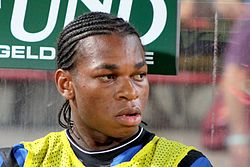 Nigeria’s petit midfielder, Joel Obi, has committed his future to Serie A giants, Inter Milan, The Eagle Online can report.
The 22-year old player snubbed offers from English Premier League sides, Sunderland and Newcastle, and Parma of Italy at least for this season.
Sources hinted that the Nerazzurri, aware of the midfielder’s value, prefers to keep him in spite of injuries that have plagued the player’s career in last few seasons.
It was reported that Newcastle and Sunderland were both been linked with the 22-year-old and although the Nigerian international’s agent was not naming names, he claimed there are Premier League sides interested.
“I can say that Joel is a player liked in the Premier League,” said Renzo Contratto. “The guy had a difficult season but now is fine.
“He will leave for the Inter pre-season and then we’ll see what the club wants to do.
“Obi is an Inter player and has a contract until 2017, but from now to the market’s end, no one can predict what will happen.”