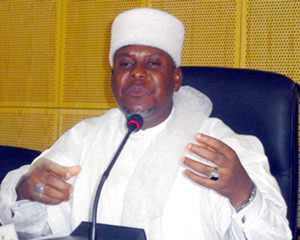 The ‎Jama’atu Nasril Islam on Sunday dismissed speculations that it received N12 billion from outgoing President Goodluck Jonathan and challenged the author to produce evidence.

The organisation also threatened legal action if the author of the dangerous rumour failed to substantiate, withdraw the information and apologise to JNI.

This was contained in statement issued by the Secretary General of JNI, Dr. Khalid Aliyu, in Kaduna.

The statement said the allegation went virile in the social media and other electronic media platforms.

It said: “JNI received N12 billion largesse from the out-going President of the Federal Republic of Nigeria.

“The most unfortunate part of the article was its deliberate and scantiest reference in the paragraph JNI featured, details were not provided at all, whereas to some extent nitty-gritties were provided for the other stated organisations.”

The JNI, therefore, expressed worry over the scandalous allegation, considering the various concerns raised by well meaning individuals as a result of the weightiness of the allegation.

It said: “We wish to place on record and for posterity that such has never occurred and we (JNI) don’t really understand the ill motives of those behind the release.

“We did not understand or is it because some other faith(s) are said to have collected the presidential largesse?

“Hence, Muslims must be asserted to have collected same? Why do they want to discredit and smear the JNI at all cost?

“Why is the allegation coming now, despite knowing fully that the JNI never had any political romance with the government before and or during the elections.

“It is our firm belief that the purported write up was orchestrated to smear the name of Islam and Muslims who suffered undue discrimination and deliberate marginalisation under the outgoing government, and to cause bad feelings among the Ummah.

“Without mincing words, JNI is proud to make it known to all and sundry that the out-going President requested for an audience with its leadership and it was turned down outrightly by the leadership of the Muslim Ummah.”

While noting that the allegation was ill-timed, the JNI said it has serious reservations about the motives behind that meeting and its impending implications.

It specifically challenged the writer of that obnoxious article to name the particular person who was contracted to collect and share the said money in the name of JNI.

It said: “Whoever has any relevant information as to who, where, when and how the said money was collected, should please come out with evidence.

“We expected that common sense was enough to refute such spurious and mischievous allegation, N12 billion is indeed a huge amount that cannot be transferred unnoticeable.

“How many trucks do you need to carry such amount? For the avoidance of doubt, I swear by Allah (SWT), to every discerning mind that as the Secretary-General of JNI, nothing of such happened and no body and or any party contacted us for the disbursement of any type of largesse.”

The body advised Muslims and the general public to disregard the information, describing it as false, baseless and without an iota of truth in it.

It warned that the JNI would certainly take legal action to protect its image, integrity respect and honour if no genuine redress was made by those behind the script.