Jim Ovia recognized in US as Africa’s business leader 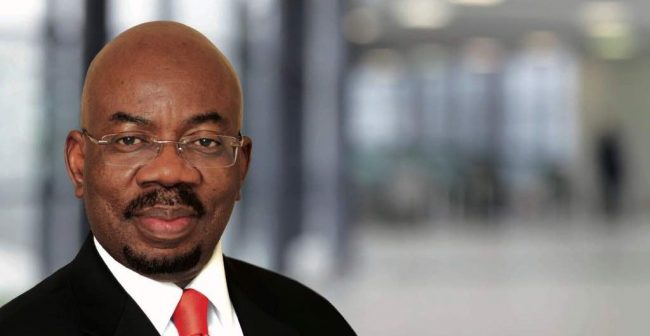 Endorsement and recognition have again come the way of Jim Ovia, the Chairman of Zenith Bank Plc, as he was on Tuesday night recognized as a leading entrepreneur in Africa by the African-American Institute.
Ovia, in what is a reward for his business leadership and philanthropy, received the AAI 2017 Business Leader Award at a ceremony held on the sidelines of the ongoing United Nations General Assembly in New York, the United States.
He was recognized for impacting hugely on enterprise and human resource development on the continent.
Ovia, the founding Group Managing Director and CEO of Nigeria’s largest bank, was honoured along with President Nana Akufo-Addo of Ghana (National Achievement), Nicole Amarteifio (Leadership in African Media and Arts) and Bozoma Saint-John, the Chief Brand Officer of UBER (Innovation & Technology).
The Africa-America Institute was set up in 1953 to help increase Africa’s human capacity for development through training and education and recognizes Africans who have demonstrated remarkable achievements in various fields, the intention being to present the award winners at the high profile stage of the UN General Assembly as representatives of the great work going on in Africa.
The AAI awards, which is announced annually and showcases Africa’s best, has honored individuals who are working to fulfill AAI’s mission of increasing Africa’s human capacity for development and promoting engagement between the African continent and America.
The awards are presented at a special gala night bringing together African Heads of State and diplomats, international and senior US Government officials, business and civil society leaders, educators, journalists, philanthropists and other prominent figures who are working towards advancing economic and development progress in Africa
Ovia was at the helm of affairs at Zenith Bank from inception for 20 years until his resignation in July 2010, but was reappointed the Chairman of the bank in 2014.
He was a member of the National Economic Management Team of Nigeria and he is a member of the Honorary International Investors’ Council.
Ovia is a philanthropist and the founder and proprietor of James Hope College, Agbor, Delta State.
His foundation, the Jim Ovia Foundation, which focuses on providing scholarship to the less-privileged, has a number of beneficiaries that are now qualified medical doctors and engineers among others.
He is also the founder of several enterprises and philanthropic institutions, including the Youth Empowerment & ICT Foundation, which focuses on improving the socio-economic welfare of Nigerian youths by empowering them to embrace Information and Communication Technology.
In recognition of his achievements, particularly in support of the Nigerian economy, Ovia was conferred with the national award of Commander of the Order of the Niger in November 2011.
Ovia holds a Master’s degree in Business Administration from the University of Louisiana, Louisiana, USA (1979) and a B.Sc. degree in Business Administration from Southern University, Louisiana, USA (1977).
He is an alumnus of Harvard Business School (OPM).