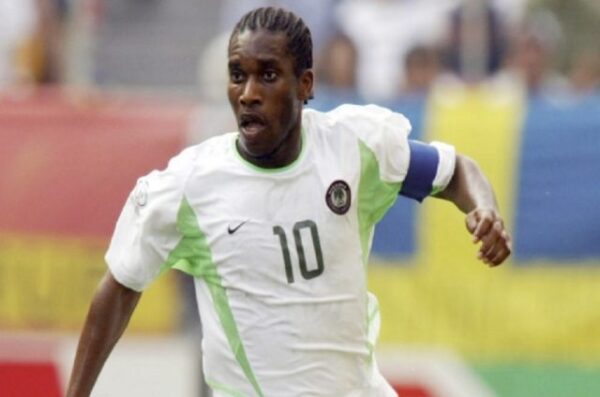 A Lagos State Prosecutor, Y. A. Pitan, said a former Super Eagles’ Captain, Augustine Okocha, popularly known as Jay Jay  Okocha, accused of income tax evasion since 2017, had finally settled with the Lagos Internal Revenue Service.
She told an Igbosere High Court on Wednesday in Lagos that the LIRS informed the prosecution team that the defendant visited its office and reconciled his accounts.
Pitan then prayed the court for an adjournment to enable her file a notice of discontinuance of the charge preferred against Okocha.
Justice Adedayo Akintoye consequently withdrew the warrant of arrest earlier issued on the defendant.
She adjourned further hearing until November 14 to enable prosecution file notice of discontinuance of the charge.
The News Agency of Nigeria reports that the prosecutor had on May 28 informed the court that the defendant visited the office of LIRS to reconcile his accounts.
The prosecutor then said the defendant could not reach a common ground with the agency.
Earlier, the prosecutor had filed a three-count charge against Okocha on June 6, 2017, accusing him of: “Failure to furnish returns of income for tax purposes with the LIRS, and failure to pay income tax.
“The offences contravene Section 56(a) and (b) of the Lagos State Revenue Administration Law No. 8 of 2006 and Section 94 (1) of the Personal Income Tax Act Cap P8 Laws of the Federal Republic of Nigeria 2004 (As Amended).”