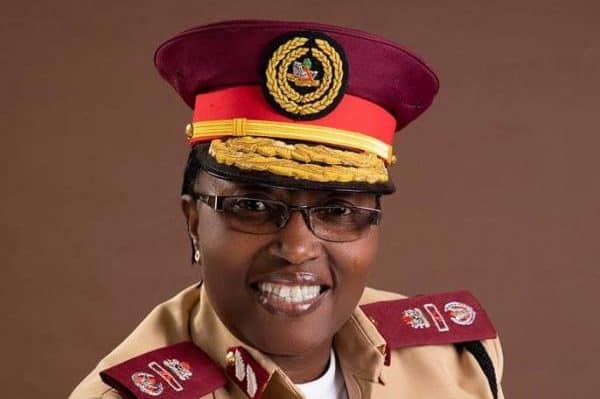 Share
Facebook Twitter LinkedIn Pinterest Email
Pat Emeordi, the Sector Commander of the Federal Road Safety Corps in Plateau State, who retired from service on Tuesday, has advised the corps’ personnel to desist from extorting monies from motorists.
Emeordi gave the advice at a Pulling-Out Parade in her honour on Tuesday in Jos.
The News Agency of Nigeria reports that Emeordi, who served as sector commander in the state since 2017, bowed out of service after attaining the age of 60.
The retired officer said that bribe taking and extortion of motorists by personnel of the corps had remained a major stain on the integrity of the outfit.
She said the practice was also hindering the FRSC from achieving its statutory aims and objectives.
According to Emeordi, for the corps to actualise its set goals and objectives, the bad eggs in the system must be weeded out.
She declared that “unwholesome practices” among personnel of the corps were frustrating the efforts to make Nigerian roads safe for all.
She said: “Bribe taking and extortion of monies from motorists by our men on highways take us backward.
“I know how much efforts I put in fighting this menace among our personnel on the Plateau.
“So, for FRSC to achieve its set goals and objectives, there is the need for officers and men to desist from taking bribe or extorting monies from drivers on highways.”
Emeordi acknowledged that it was not possible to eradicate the menace from the system, but said with resilience, it would be reduced to the barest minimum.
She also called on officers and men of the corps to be upright and stay away from activities that would further dent the image of the corps.
extortion FRSC JOS Pat Emeordi Plateau State Pulling-Out Parade
Share. Facebook Twitter Pinterest LinkedIn Tumblr Email