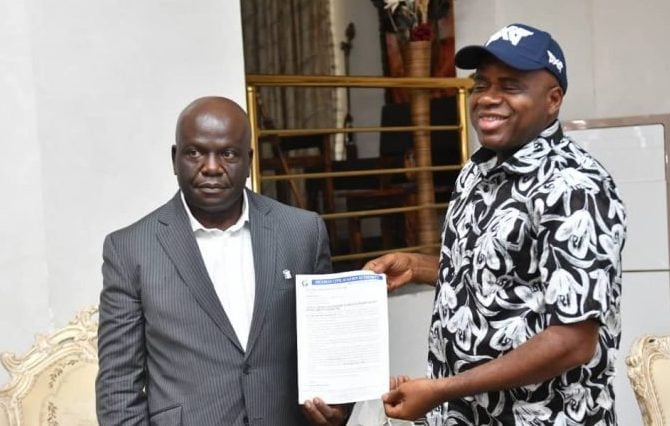 After months of delayed expectation, the Bayelsa State-owned airport on Saturday finally got the nod of the Nigerian Civil Aviation Authority to commence commercial flight operations.

The NCAA Director General, Dr. Nuhu Musa, presented the regulatory body’s approval letter to an elated Governor Douye Diri at the Government House, Yenagoa, after the team had completed the mandatory inspection of the airport and its facilities.

The News Agency of Nigeria reports that the airport project was delivered by the immediate past administration of Senator Seriake Dickson.

Musa said the airport met all airspace standards and is 100 per cent ready for daytime flight operations.

The NCAA DG also explained that the approval was sequel to the report of the agency’s inspection team, which, prior to the visit, had certified that out of 29 gaps, the airport had been able to close 26.

He noted that other requirements were non-safety related and that work was already in progress to achieve night flight operations.

The DG said the agency had to limit flight operations to daytime as the runway lights were still being installed, noting that once completed, full approval would be granted.

Musa commended the state government for the quality of work done at the airport and the capable personnel from the state that facilitated the issuing of the licence.

Responding, Diri, who was full of joy, expressed appreciation to God for making the long-awaited day possible.

He said issuing of the operational licence was a winding journey that began from the administration of his immediate predecessor to when he assumed office over a year ago.

Diri commended Dickson for his foresight in ensuring that the state had its own airport, noting that Dickson started the project after it had been on the drawing board of past administrations, and saw to its completion before handing over to him.

The governor said his administration was, therefore, determined to ensure flight operations commenced as he set the machinery in motion to get the NCAA nod.

He said: “This is a dream come true for our state and our people.

“I thank God Almighty because this journey had been a winding one from my immediate past predecessor and I have been in the saddle for over a year waiting for this licence.

“Today, God made it possible.

“This airport had been on the drawing board, but he took the bull by the horns by starting the airport and virtually completing it.

“May I, on behalf of this government and the people of Bayelsa appreciate him.

“As I came on board, having seen what he did, my administration had to cross the Ts and dot the Is.

“Having been briefed on certain requirements, I wasted no time in approving what was necessary to ensure that the airport was ready for use.

“Today, we have the approval for the airport to commence commercial flight operations.”

Diri also expressed appreciation to the Minister of Aviation, Hadi Sirika, the NCAA DG and other officials for the approval and promised to do all it would take to get full flight operations.

Diri averred that all the necessary facilities and equipment were in place and would be installed in no distant time, especially the runway lighting system.

The governor stressed the significance of the Bayelsa airport, particularly in the South South region, that is the centre of oil and gas activities in the country.

He said: “Bayelsa State is a major contributor to the oil and gas business in Nigeria.

Bayelsa is the centre not only of oil and gas, but also other economic activities within the South South and the South East.

“So, the Bayelsa airport is critical not only to Bayelsans but indeed the people of the South South, South East and by extension the nearby countries.

“We are on the border with the Gulf of Guinea.”