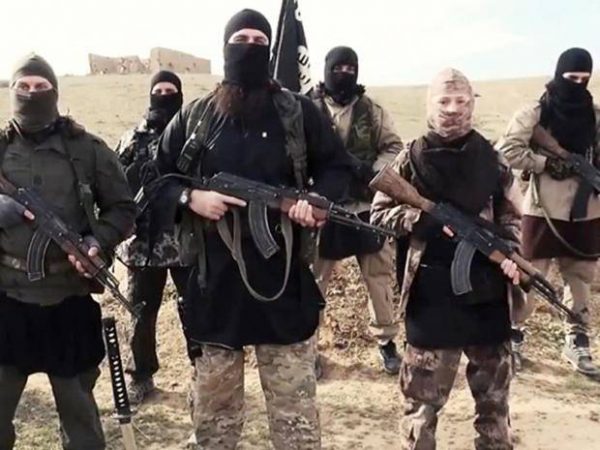 Share
Facebook Twitter LinkedIn Pinterest Email
ISIS thugs have called on their supporters to launch attacks at the World Cup in chilling new online propaganda.
The terror group’s latest poster, showing a knife set on a red back ground in front of a football stadium in Russia, comes with a French caption translated as: “Kill them all.”
It is the latest in a series of ISIS threats made against football’s showpiece tournament, which kicks off on June 14 in Moscow.
The poster was released by a French ISIS-linked group, according to SITE Intelligence, which monitors terror activity.
In April, ISIS warned Russian President Vladimir Putin he will “pay the price for killing Muslims”.
The poster showed a jihadist emerging from an explosion and holding an AK-47 aloft, with a packed football arena in the background.
President Putin can be seen on the left of the image with a black and orange target aiming straight at him.
Across the poster is written: “Russia 2018. Putin you disbeliever. You will pay the price for killing Muslims.”
The threat is likely to be linked to Putin’s support for Syrian President Bashar Al-Assad in his government’s fight against ISIS – a battle also fought by US-backed Kurdish forces and other rebel factions in Syria.
In March, ISIS supporters targeted Argentinian footballer Lionel Messi in a poster showing him kneeling next to a jihadist.
Messi could be seen in the orange jumpsuit, often worn by victims in ISIS execution videos, kneeling on the grass of Moscow’s Luzhniki Stadium – the venue for the World Cup final.
Previous posters have shown a rifle-carrying ISIS fighter and a bomb baring the infamous black ISIS flag in front of a football stadium with the 2018 World Cup logo.
The 2018 FIFA World Cup will be played across 11 cities in Russia from June 14 to July 15, when the final will be played at the Luzhniki Stadium in Moscow.
Tens of thousands of England fans are expected to base themselves in St Petersburg for the month-long finals.
Post Views: 7
ISIS Russia SITE Vladimir Putin World Cup
Share. Facebook Twitter Pinterest LinkedIn Tumblr Email