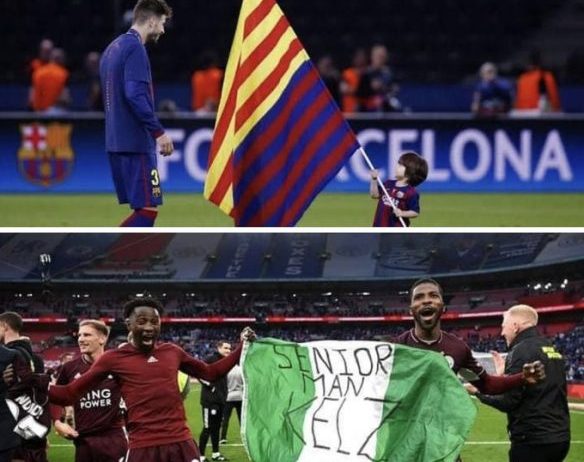 The Leader of the proscribed Indigenous People of Biafra, Mazi Nnamdi Kanu, has attacked Kelechi Iheanacho and Wilfred Ndidi for celebrating with the Nigerian flag after Leicester City defeated Chelsea to clinch the FA Cup on Saturday night.

Iheanacho, who prides himself as Africa’s all-time highest goal sorcerer in the FA Cup, led the celebrations with the Nigerian flag, while his compatriot Ndidi also joined in wrapping the flag around themselves.

The show of affection for the Nigerian flag by the Super Eagles players gathered massive attention on social media.

However, Kanu was left disappointed by the two Nigerians who hail from southeastern Nigeria.

The leader of the IPOB described their actions as shameful and told them to emulate Spanish defender Gerard Pique who always support calls for Catalonia.

Kanu wrote on Twitter: “Gerard Pique is a World Cup winner with over 103 caps for Spain. He never turned his back against Catalonia freedom. Severally, he has shown open support for Catalan freedom.

“But our Iheanacho & Ndidi with #Zoo flag? Shame!

The statement by Nnamdi Kanu has garnered over 5,000 reactions.

@CountryDan93 wrote: “@MaziNnamdiKanu, Do what you must do and leave this footballers out of it. If you did follow them you did see that they sing, communicate and promote the igbo culture. Southern and some part of northern Nigeria supported them yesterday. They were only showing appreciation. Leave them out!

@RuthMadaki1 also cautioned @MaziNnamdiKanu saying: “Can they shine in peace please? Biafra no join them play match. they can choose to celebrate how they want to after all na their personal victory. May God give them even greater career success.”