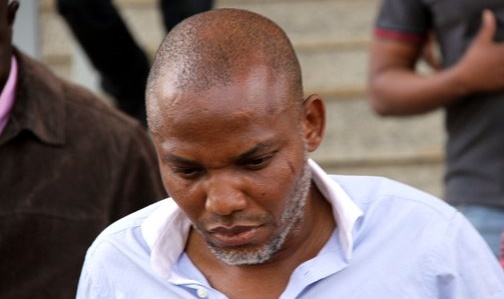 Justice Binta Nyako of a Federal High Court in Abuja on Thursday gave assurances that President Muhammadu Buhari’s alleged opinion on the detained leader of the Indigenous People of Biafra, Nnamdi Kanu, would not affect the hearing and determination of the suit.
It would be recalled that President Buhari had during a presidential chat said Kanu and his co-defendants who are standing trial over alleged treasonable felony and terrorism would not be released on bail.
Justice Nyako while refusing Kanu’s bail application on Thursday, noted that as a citizen of Nigeria, the President had the right to express his views on any matter, but that such opinions had nothing to do with issues that are before the court.
While delivering ruling on the bail request of the defendants – Nnamdi Kanu, Chidiebere Onwudiwe, Benjamin Madubugwu and David Nwawuisi – who are being tried on a fresh 11-count charge of belonging to an illegal society and operating an unlicensed radio station, Justice Nyako held that though some of the offences were bailable, most of them were not and carry life imprisonment upon conviction.
The judge held: “On the issue raised by the the first defendant that President Muhammadu Buhari made a statement in his media chat, well, the President is a citizen of Nigeria with freedom of speech and can have opinion on any matter.
“But I do not see that the President’s opinion necessarily has position of the law.
“Any matter before the court will be determined based on the law and facts placed before it and not by any other consideration.”
The court further held that by the provisions of the Administration of Criminal Justice Act, 2015, bail has become almost automatic unless the prosecution can prove why the defendant should not be granted bail.
Subsequently, the court ordered for accelerated hearing of the suit and adjourned the suit till December 13, 2016 for ruling on a request by the Federal Government to shield the identities of the prosecution witnesses from public view.