IOM, EU facilitate return of 14,036 Nigerians from Libya, France, others in 26 months — NEMA 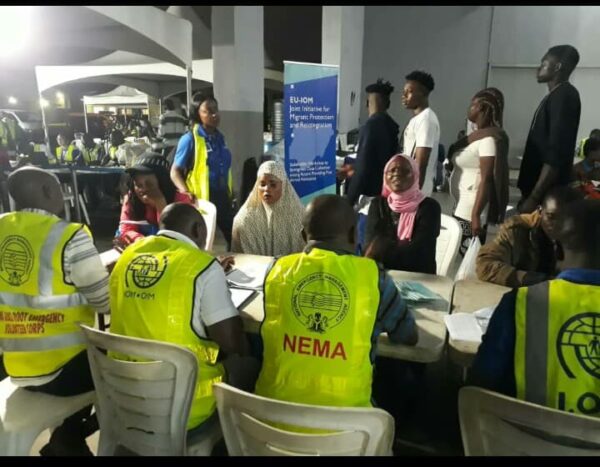 The National Emergency Management Agency on Friday said a total of 14,036 Nigerians have voluntarily returned home under the Assisted Voluntary Returnees Programme which began in April 2017.
The Nigerians, who were stranded in Libya, Niger, Mali, Burkina Faso, Ireland, France, Gambia, Austria, Poland, Morocco and Liberia, were brought back by the International Organisation for Migration and the European Union.
The News Agency of Nigeria reports that the Coordinator, NEMA Lagos Territorial Office, Alhaji Idris Muhammed, made the disclosure while receiving a new batch of 137 Nigerians who returned from Libya on Thursday.
Muhammad said out of the total 14,036 returnees repatriated so far, 12,457 were brought back from Libya.
He sai : “The analysis on the total number that have been brought back indicates that 465 males and 408 females amongst those brought back had psychosocial related needs.
“Also, 454 males and 618 females are having various degree of medical needs.
“The analysis further indicates that there were 61 males and 61 females unaccompanied minors who had been reunited with their relations.
“There are 37 pregnant women brought back so far in the course of the exercise.”
The coordinator thanked the EU and IOM on behalf of the Federal Government for facilitating the return of the Nigerians and also for their efforts in reintegrating them back to the society.
On the 137 new returnees, Muhammed said they were brought back in a chartered Al Buraq airline with registration number MVTBRQ189/20.5A-WAC.
He said the aircraft landed at the Cargo Wing of the Murtala Muhammed International Airport, Lagos at 8:20pm on Thursday.
According to him, the returnees comprise of 94 male adults, three male children and three male infants as well as 34 female adults, one female child and two female infants.
He enjoined the returnees to make better use of the opportunities and enabling environment being created by government to forge ahead and become successful in life.