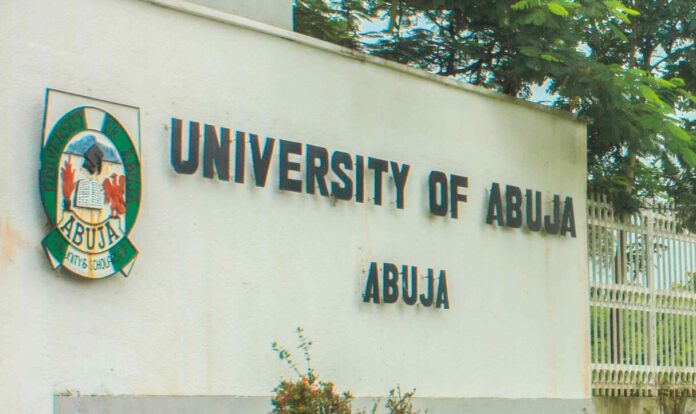 The Joint Admissions and Matriculation Board has halted the ongoing admission of students at the University of Abuja due to what it described as an unholy process and unacceptable irregularities.
In its latest investigation on the admission process of the University, Economic Confidential found out that the new management under the Vice Chancellor, Prof. Abdul-Rasheed Na’Allah, is fingered in this new development.
Checks indicate that on resumption of office few months ago, the new Vice Chancellor jettisoned the usual admission Committee of the University and allegedly contracted the admission process, which is alien to the University culture.
The Vice Chancellor recently addressed a press conference to the effect that the process was suspended by the University management for irregularities, whereas it was an instruction from JAMB to halt the process for not meeting the provisions of the guidelines.
The development caught the attention of JAMB, who in turn informed the University promptly to halt the 2019/2020 admission process, which did not meet up with its guidelines for uploading all admissions on the Central Admission Processing System.
Further investigations revealed that University regulations on admission provide that admission of students be handled by the Committee on admission headed by a chairman.
An Academic staff who would not want his name in print volunteered to this reporter that the Committee has been moribund since last year.
He lamented: “The committee is made less functional.
“The normal practice of admitting students at Departments has been abolished.
“The 2019/2020 admission process has been contracted to a private company contrary to university practice.”
Further checks also revealed that admission acceptance fee of a newly admitted student which was N4,500 before is now N30,000.
University of Abuja, which never charged any fee for the collection of original certificates after graduation, now charge N30,000, higher than any fee collected by a state university in the country.
Findings also revealed that graduates currently line up in large numbers at the Convocation Square for the collection of original degree certificates, fearing that the University has vowed to increase the amount at the expiration of one-week period.
The Certificate Collection Form issued by the Office of the Registrar simply states that the graduates attach “receipt of payment” with no amount stated.
Those interviewed at the Convocation called for a drastic reduction of the amount to N5,000 in the interest of parents and the hapless Nigerians graduates..
The university management under the new leadership also allegedly reversed the existing Senate decision on examination results.
The rule was that results from Departments are brought to the Senate through the Senate Business Committee within six weeks after the semester examinations.
The current rule, which has not been ratified by the Senate, orders lecturers to turn in results 10 days at the end of the semester examinations.
Senate members who spoke to our reporter described the order as impracticable, saying it will lead to allocation of marks to students in an effort to beat the deadline.
Each lecturer in the Humanities currently handles between 400 and 700 scripts, depending on the course, while in the Management Sciences, a lecturer marks between 1,000 and 2000 scripts, depending on the course also taken as elective from other Departments in the University.
At the last Senate meeting, the only agenda was the approval of academic calendar, but the issue of 10 days period to mark scripts was smuggled in.
The process was objected to by the majority of Senate members.
The Academic Staff Union took a resolution and said that none of its members will comply with the 10-day period to submit results and that the Senate Rule of six weeks stands and that the union will not honour an unapproved decision.
The Office of the Vice Chancellor has also taken over the issuance of coupons for the about 6,000 bed spaces in the student hostels.
The Student Affairs Office that is responsible for the issuance of coupons for student accommodation has been sidelined.
The normal practice is that the Vice Chancellor has a percentage of the total number of the available accommodation.
Efforts to contact the Vice Chancellor through phone calls and text messages failed but the University spokesperson, Habib Yakoob, told Economic confidential that the allegations were unfounded, adding that those who obliged information to this magazine were afraid of the ongoing restructuring which has turned the table against those who are used to “business as usual’ practice.
Yakoob said: “I am not aware of any memo from JAMB suspending our admission process because of irregularities, but I can assure you that those who volunteered information to you are afraid of the new order because they are unarguably beneficiaries of the old order.”
When contacted on the admission process of the University from JAMB, its Head of Information, Dr. Fabian Benjamin, confirmed the development, stating that JAMB has the mandate to correct any lapses detected in any admission process of any University.
Benjamin said: “This is a directive from the Honourable Minister of Education that any irregularity on admission process must be reversed and that the University of Abuja is not an exception.”