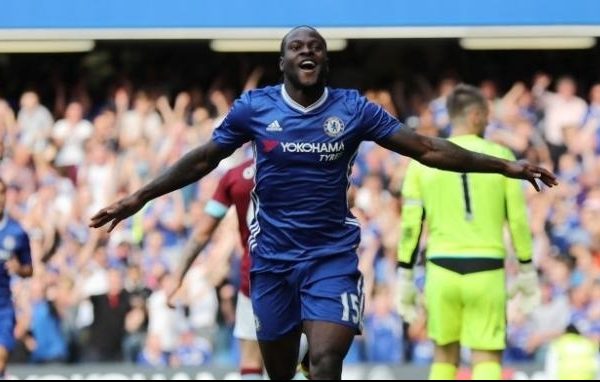 Football Soccer Britain - Chelsea v Burnley - Premier League - Stamford Bridge - 27/8/16. Chelsea's Victor Moses celebrates scoring their third. Reuters / Eddie Keogh. Livepic
Share
Facebook Twitter LinkedIn Pinterest Email
Victor Moses’ second half strike was all the Super Eagles needed to beat their Poland counterparts 0-1 at the Municipal Stadium in Wroclaw on Friday.
The Chelsea star broke the deadlock from the spot after the winger was brought down
in the 60th minute of the tie. Moses sent the Polish goalkeeper to the wrong side to put Nigeria ahead.
Nigeria’s manager, Gernot Rohr handed Turkish-based Williams Trost-Ekong the captain’s band against the Polish side, just as he opted for Leon Balogun, Shehu Abdullahi and Brian Idowu provide cover for Deportivo La Coruna’s Francis Uzoho in goal.
Super Eagles’ returnee, Joel Obi, Wilfried Ndidi, Joel Obi and Kelechi Iheanacho marshalled the midfield, while the duo of  Victor Moses
and Odion Ighalo led the assault.
Early in the game, Poland’s first attempt at goal fell at Robert Lewandoski but the Bayern Munich forward effort was side netted.
The Polish again came close to breaking the deadlock after Uzoho fumbled a kick from the right flank but the effort was clear off the goal line to keep score at nil all at half time.
Uzoho’s heroic denied Lewandoski from hitting the back of the net in the 55th minute. The Deportivo La Coruna goalie blocked the striker’s from a close range.
Russian-based Ahmed Musa stepped in for Arsenal’s Iwobi in the 60th minute of the tie as the Nigerian side aim to beef up the midfield.
Onazi also replaced star performer and Torino import, Joel Obi in the 65th minute as Rohr tries midfield options at his disposal.
Tyrone Ebuehi got a look in as he took injured Shehu Abdullahi place in the game.
Iheanacho was also substituted for Iheanacho in the 82nd minutes of the tie.
Nigeria held on to the lone goal until the end of the game. They travel to London for another against Serbia on Monday.
Gernot Rohr Poland Shehu Abdullahi Super Eagles Victor Moses
Share. Facebook Twitter Pinterest LinkedIn Tumblr Email