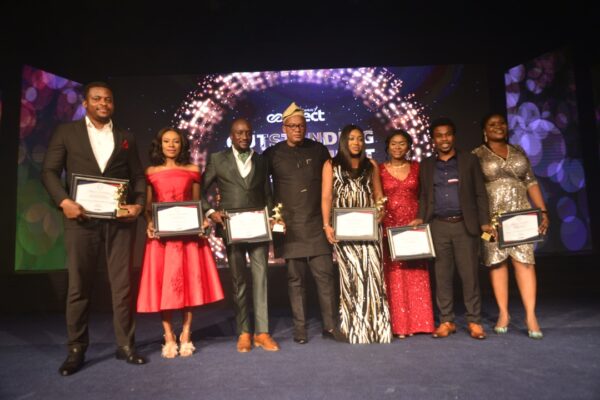 Interswitch Group, the pan-African digital payment company, has honoured its partners and employees with various awards at the Interswitch Connect Sales Dinner and Awards night.
The event took place at Balmoral Event Centre, Federal Palace Hotel and Casino, Victoria Island, Lagos.
The event was hosted to recognise the performances of members of staff and key partners who have contributed immensely to Interswitch’s successes over the past years.
In his opening remarks, Mitchell Elegbe, GMD/Founder of Interswitch, said: “Today’s award ceremony is Interswitch’s token of appreciation of our Sales team and our customers who have contributed immeasurably to our strong corporate performance over the past year.
“We understand how the ripple effects of the efforts of an inspired few can positively affect the larger group, as such we hope to use this event to set up the awardees as character examples for the rest of the team to emulate.”
Award recipients included: First Bank Plc, for Highest number of Verve transacting cards; Lagos State, for State with highest disbursement; and Kaduna State for highest collections in the Northern.
Chinyere Don-Okhuofu, Divisional CEO, Interswitch Networks, in her closing remarks said: “I want to remind the awardees that the reward for hard work is more work. So I urge them to continue to put their best feet forward always.”
A key aspect of the event was a keynote address by Ibukun Awosika, Chairman, First Bank of Nigeria.
AWosika spoke on: “Driving the Growth of Africa’s Digital Economy.”
Awosika listed some of the opportunities available on the African continent and the role technology companies can play in maximizing them.
She also commended Interswitch for demonstrating the capabilities of an African company.
It was a night of glamour, fun, food and wine.
Guests were thrilled with entertaining performances from different artistes such as Adekunle Gold, The little magnets, Kaffy, Laffup and DJ Neptune.