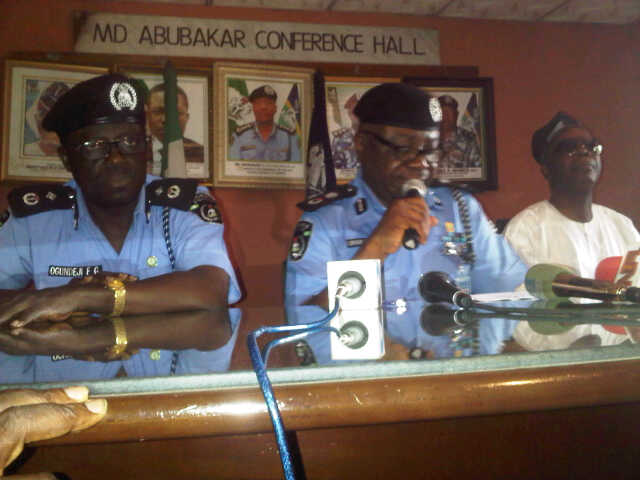 The Lagos State Police Command has arrested the gang of robbers, who attacked the Murtala Mohammed International Airport on March 13, 2013, killing two policemen and injuring several others.

The gang of robbers were also said to be the same bandits, who attacked a Bureau De Change last year (2012) at the same airport, carting away dollars valued at over N600 million.

Among the suspects in police custody is one Pastor Ibikunle Olanrewaju John, the General Overseer of The Way of Joy’ church.

The church is located in the Ikotun Egbe area of Lagos State.

The Commissioner of Police, Lagos State Police Command, Prince Umar Manko, said the men were caught after detectives attached to the Special Anti-robbery Squad, recovered the corpse of one of the slain robbers, identified as Teslim Okunola, aka Esho, and discovered some items on him.

Those items were used to apprehendthe seven suspects now in police detention.

There were also a Toyota Sienna space bus with registration number BDG 918 AG, two masks and some quantity of charms buried in an iron box and hidden in their hideout, deep inside the forest at Agoro Village in Odogbolu Local Government area of Ogun State.

Recalling the incident, which occurred on March 13, 2013 on the turf of the airport command, Manko explained that  after the airport Commissioner forwarded certain items recovered from the dead robber, Esho, SARS men took over the investigation, leading to success.

Manko added: “On March 13, at about 7:30pm, an incident happened, where robbers went to International Airport and killed two policemen.

“They went on official engagement and got killed by the bandits, who came to rob the international airport.

“The robbers succeeded in wrecking havoc.

“But before he was killed, one of the policemen fought gallantly, killing one of the robbers (Esho).

“He also made sure that other members of the robbery gang were not able to take his corpse away.

“It was that corpse that led to the apprehension of the gang.

“These robbers are not based in Lagos.

“They also attacked the airport last year, making away with $2 million, valued in Nigerian currency to be N600 million.

“All the suspects have confessed to the armed robbery at the airport and several other deadly robberies in Lagos, Ogun, Ondo and Kwara States.

“They also confessed to the armed robbery attack at the Murtala Mohammed International in February 2012. “Investigation is not yet concluded.

“We’re still looking for two other members of the gang.”