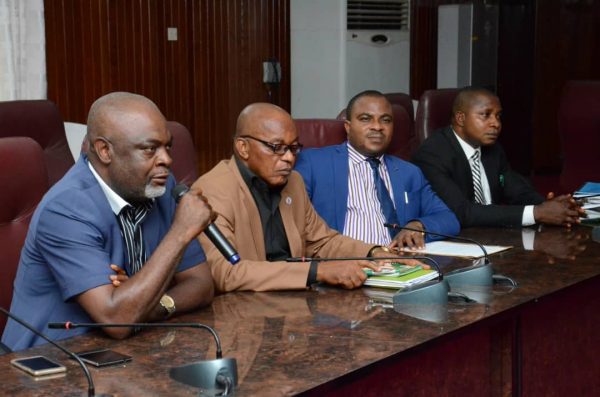 The Government of Benue State has given an appeasement donation of N2 million to the Ebonyi State Government over the recent killing of over six Ebonyians by the Benue people in inter- boundary dispute.
The Benue State Deputy Governor, Benson Abounu, who represented Governor Samuel Ortom, delivered the amount when he led a high powered delegation to Ebonyi State Government House, Abakaliki on Wednesday to condole with the State over the unfortunate incident.
Confirming the development to newsmen at the end of Wednesday’s State Executive Council meeting, the Ebonyi State Commissioner for Border Peace and Conflict Resolution, Sunday Inyima, explained that the said amount was donated to augment the State’s assistance towards resettlement of the affected families.
Inyima noted that since the beginning of the dispute over 98 years ago, the visit was the first time the Benue State Government has shown great concern over the recurrent loss of lives often recorded along the borders and attributed the development to Governor David Umahi’s approach to crises management.
Inyima, who said the delegation was received by the Deputy Governor of Ebonyi State, Eric Kelechi Igwe, also confirmed that the two parties held brief closed door discussions where far reaching resolutions were reached prior to a comprehensive peace meeting to be held at Abuja on October 29.
Inyima Said: “Let me inform the press and the general public that today, Ebonyi State Government received in audience a very high powered delegation from Benue State led by no less a person the Deputy Governor of that State.
“Their mission in Ebonyi State was to condole with the people of Ebonyi over the gruesome killing of Ebonyi indigenes at the Ohaukwu axis, particularly Ngbo communities of Ukwuagba, Ekwashi and Umuogudu Akpu, where six Ebonyi indigenes were gruesomely murdered under the name of communal inter-state boundary clash.
“It may please you to note that this issue of our boundary problem with Benue State is a thing that has actually lasted for a very long time, dating down to the 1920s.
“But it will also be good to note that since that time to this particular date, there has never been a day that the Benue State Government sent a delegation to come and condole with the people of Ebonyi State.
“May be it is the first time since the inception of that crises.
“On their visit, they brought with them the sum of N2 million, which the Government of Benue State said should be handed over through the Local Government Chairman of Ohaukwu to the individual families that lost their great sons and daughters.
“We met with them in the office of the Deputy Governor and we also agreed and made some resolutions in an informal private discussion with them, which was signed.
“By Monday next week, 29th of October to be precise, we are going to meet with them and the National Boundary Commission Chairman at Abuja to further discussions on this matter, and we are believing that some of the salient issues that we raised today are actually going to help us in the discussion we are going to have in Abuja.
“All these are geared towards ensuring that lasting peace is brought to bear, especially with regards to our borders with Benue State and indeed that with Cross River State.”
Recall that six persons from Ohaukwu Local Government Area of Ebonyi State were last week murdered by some people from Benue State in an alleged unprovoked inter-border attack.