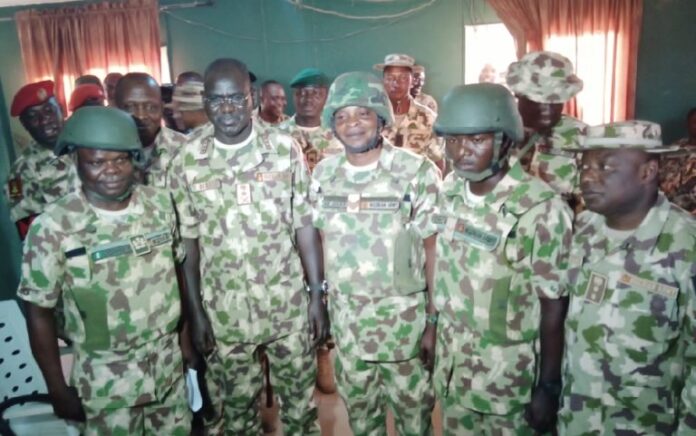 Three soldiers of Operation Lafiya Dole have been rewarded with special promotion to the next rank for their outstanding performance in the ongoing war against insurgency in the North East.
The Chief of Army Staff, Lieutenant General Tukur Buratai, decorated the soldiers during a visit to their camp on Sunday as part of his operational visit to troops in the North East.
The three soldiers: Felix Ugwu, Kehinde Goban and Ishaq Yesif, are serving at Super Camp 3 in Buratai, Biu Local Government Area of Borno State.
Ugwu was promoted from the rank of Warrant Officer to Master Warrant Officer, while Goban was promoted from the rank of Corporal to Sergeant and Yesif from the rank of Private to Lance Corporal.
They were also presented each with generating sets and 32 inch plasma television sets.
The soldiers were presented to the Chief of Army Staff for the special award and decoration with their new ranks by the Commander, Colonel Muhammed Adamu.
Buratai said that based on the recommendation of their commander on their gallantry, he was convinced that they deserved to be honoured in that way.
He urged other officers and soldiers to continue to work hard with discipline, and assured that everyone who deserved such promotion would be given.
On the recent innovation by the theatre command, Buratai said the Nigerian Army would continue to encourage innovation in science and technology and improve on their capabilities.
He said: “The army is an institution on its own and it is capable of doing a lot of things in order to make it functional and to function effectively in the discharge of our constitutional responsibility.
“We commend the initiative of the theatre commander and all the officers that are working hard to contain the security challenges in the country, especially in the North East.
“That of Maiduguri is adhoc and out of necessity and it is a lot of deliberately planned initiative by the commander and we are supporting him to ensure that his troops operate confidently by providing the necessary protection through these equipment improvisation.
“But that of Kaduna is special.
“It is deliberate and it is part of the Defence Industrial Complex because we are collaborating with the Defence Industries Corporation of Nigeria.
“It is to see how we can be self sufficient in our own industrial need.
“So that one is budgeted and we will continue with what we are doing.”
Earlier, Adamu said the soldiers’ gallantry was instrumental to the recent successes so far recorded by the troops against Boko Haram Terrorists.
He said the soldiers had distinguished themselves in line with the vision of the COAS to have a disciplined and responsive Nigerian Army in the discharge of its constitutional duties.
The commander, who read the letter of commendation in respect of the Warrant Officer, disclosed that he was instrumental to the establishment of new defence post for new deployment within their area of responsibility.
He urged them to continue to maintain the high standard that Nigerian Army is known for.
One of the beneficiaries, Master Warrant Officer Ugwu, said the recognition for the award and the promotion was a surprise to him.
He expressed appreciation for the special promotion and promised to do more.
The News Agency of Nigeria reports that Buratai, who had been visiting troops locations in Borno State, also visited Dutsen Kura mountain troops location on Sunday night.