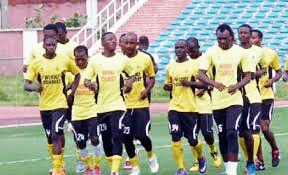 Share
Facebook Twitter LinkedIn Pinterest Email
Players and technical crew of Insurance Football Club of Benin on Monday went spiritual to break the yoke of losing away matches in the Southern Conference of the Nigeria National League.
The club’s Media Officer, Ben Ogbemudia, who disclosed this to the News Agency of Nigeria during the team’s work-out at the Samuel Ogbemudia Stadium, Benin, said the club set aside Monday to go spiritual by fasting.
He said the state Deputy Governor, Philip Shaibu, who joined the team to observe the fasting, noted it was necessary for their quest to secure promotion to the elite division at the end of the season.
NAN reports that Insurance, which won the week 22 home match on Saturday, lost all but one away match in the current season.
The club currently occupies the seventh position in the 18 teams of the Southern Conference of the NNL with 33 points.
The Conference, which has teams such as Bayelsa United, Crown FC, Gate Way, Delta Force and Go-Round FC, has Heartland FC of Owerri on top of the table with 45 points from 22 matches.
Insurance is scheduled to play against the tables last but one team, First Bank of Lagos, in their week 23 round of matches in Lagos on Saturday.
Ogbemudia said the decision to go into fasting was the desire of the team not to leave anything to chance by doing all legitimate things in their bid to secure promotion.
He said: “We have players that are capable of securing promotion for us but we need to win matches, especially our away matches. We only drew one away match against Bayelsa during the first stanza and lost in the remaining.
“While we prepare adequately for matches, we needed to go spiritual in order to break this yoke of losing away matches.
“We know that to secure promotion, winning away matches is vital and our plan is to ensure we win at least three away matches and all our home matches.
“This is not going to be a difficult task with God on our side. We still have as many as 12 matches to the end of the season and we are poised to be one of the two teams that will secure promotion.”