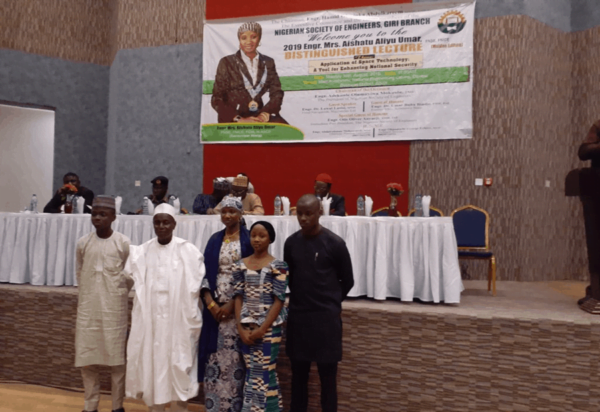 The Nigerian Society of Engineers has called on the Federal Government to deploy space assets to address the nation’s security challenges.
Adekunle Mokuolu, President of NSE, made the call on Monday in Abuja, during the First Distinguished Lecture organised by Giri branch of the society.
The lecture, with the theme, “Application of Space Technology: A Tool for Enhancing National Security’’ was held in honour of Mrs Aishatu Umar, the pioneer chairperson of the branch.
The News Agency of Nigeria reports Umar was honoured “for her pivotal roles in the establishment and sustaining and consolidating the Giri branch of the society.
Mokuolu, who was represented by Babagana Mohammed, the Deputy President of the society, said expectations were high from the citizens for government to address the lingering insecurity in the country.
He, therefore enjoined the government to harness the available space and engineering capabilities in the country to resolve insecurity and related challenges.
He said: “For us to achieve a formidable security framework for our nation a combination of pragmatic steps must be taken and it must include holistic deployment of our space assets.
“The assets will not only be useful for security surveillance, but will also ameliorate poverty by improving on agriculture and dealing with incidences of diseases and climate change,’’ he said.
Speaking in the same vein, the branch Chairman, Mr Hamid AbdulKareem, decried security threats in many part of the country, stressing that space engineering technology can be deployed to address them.
“Providing solutions to these national challenges may not be fully achieved without the sterling contribution of the Nigerian engineers.
“Nigeria is left with no choice than to critically and timely explore the use of varying technological strategies, especially space technology to bring to sight the desirable defeat of insecurity that pervades the land.’’
Abdulkareem said NSE is ready to join forces with relevant stakeholders to provide lasting solutions to the worrisome security challenges in the country and within the West African sub-region.
He urged stakeholders to explore the applications of space technology to improve intelligence gathering efforts in the prevention of terrorism, violence and interventions by security agents.
Dr Lasisi Lawal, Head, Space Navigation, Nigerian Communication Satellite Limited said the use of space assets was crucial to national security and international stability of any country.
He said: “Space-based capabilities provide integral support to the military.”
He added that the existence of a national space programme was symbolic to a country’s relevance in the comity of nations.
The lecturer added that Information Communication Technology  that is available, affordable, accessible, adaptable and adoptable will play key role in advancing national security.
He, however, said that government needed to establish the Assembly, Integration and Testing Complex, vital to the development of space technology in the country.
Lawal also said that the space agency and NIGCOMSAT needed huge support to enable them implement the 25 years roadmap of the country’s space policy which was set up in 2005.
In a remark, Umar said the branch has the human capability to make remarkable contributions to the development of NSE and the national security issues.
She thanked the branch for honouring her and urged for the creation of more branches of the society.
NAN reports that Umar is currently the Chief Resident Civil Engineer, Federal Housing Authority and the Chairman, Nigerian Institution of Civil Engineers.