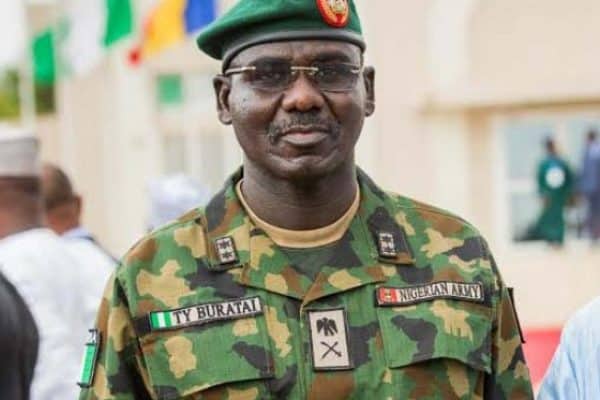 The Chief of Army Staff, Lieutenant General Tukur Buratai, has reassured that the counter insurgency operations in the North East and other operations against insecurity across the country are on course.
Buratai gave the assurance in a statement by the Nigerian Army Operations Media Coordinator, Colonel Aminu Iliyasu, on Monday in Abuja.
He said current indicators had revealed tremendous successes across the various theatres of operation.
According to him, after a careful review of operations in the North East, Army Headquarters has gladly observed renewed zeal and determination of troops to take the counter insurgency operations to their logical conclusion.
He said: “The outcomes will be favourable to Nigeria and Nigerians as evident in the recent decimation of many Boko Haram/Islamic State West Africa Province criminals, including some of their top commanders.
“There have been several arrests of the insurgents’ logistic suppliers and collaborators, numerous capture of their arms and ammunition as well as rescue of many captives from the bondage of the insurgents.”
Buratai advised all local and foreign interests to exhibit more commitment and restraint on issues of Nigeria’s national security and avoid taking sides.
He added that all actions and utterances should be tailored towards supporting the national cause with a view to restoring peace and tranquility in the country.
Buratai further assured the troops that their sacrifices and that of their fallen colleagues would not be in vain.
He reiterated the unreserved commitment of the Nigerian army to defend the country and her citizens no matter the prize or odds.
According to him, the recent moribund activity of Boko Haram/Islamic State West Africa Province insurgents is synonymous with the kicks of a dying horse gasping for the last breath.
He further warned that the day of reckoning was at the door steps of all enemies of the country and Nigerians who took delight in the sufferings of innocent citizens.
He added: “All well-meaning Nigerians especially those in the North East and friends of Nigeria elsewhere are enjoined to fully support the counter insurgency operations as well as the fight against all forms of criminality across the nation.”