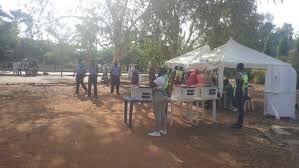 Some residents of Kuje Area Council of Federal Capital Territory on Tuesday expressed concern over the rate of motorcycles operating without number plates in the area.
The residents in separate interviews with the News Agency of Nigeria in Kuje called on the Area Council Administration to expedite action in checking the excesses of commercial and private motorcyclists in the area.
According to them, the increasing number of unregistered motorcycles in the area was exposing the residents to criminal activities, especially kidnapping.
Amos Gata, a resident of Paseli Community in Kuje, called for the registration and regulation of motorcycle operators in the area.
Gata said it would require the political will of the leadership of the Area Council for its achievement.
He said: “Almost all the commercial and privately-owned motorcycles operate without registered number plates.
“The riders are reckless and the passengers are at their mercy.
“They do not belong to any association or union and the worst is that we do not even know where many of them come from or reside.
“You cannot imagine the number of motorcyclists that would immediately converge whenever any motorcycle operator is involved in a minor accident with a car, even when they are at fault.
“God save you if policemen do not arrive at the scene on time.”
Ruben Josiah, a resident of Kayarda Area, said the Federal Road Safety Corps should ensure that motorcyclists in the area adhere to traffic rules and regulations.
Josiah said: “We are faced with the menace of commercial motorcyclists who torment other road users with their reckless riding.
“They also park indiscriminately along the road, thereby making movement difficult for other road users.
“We should not allow any group of persons to be above the law and hold majority to ransom.”
Josiah enjoined the FRSC officials to collaborate with the Area Council in ensuring that the motorcycles were registered and issued number plates for easy identification.
Lami Azaki, a resident of Sauka Area, who also called for the registration and regulation of the motorcyclists, frowned at the failure of  the Vehicle Inspection Officers to check motorcycles in the area.
The Transportation Officer in Kuje Area Council, Ibrahim Kabi, said plans were underway for the registration of all commercial motorcycle operators in the area.
Kabi said the motorcyclists had no organised union to discuss the issue of registration with, adding that there was no going back on their registration soon.
NAN.