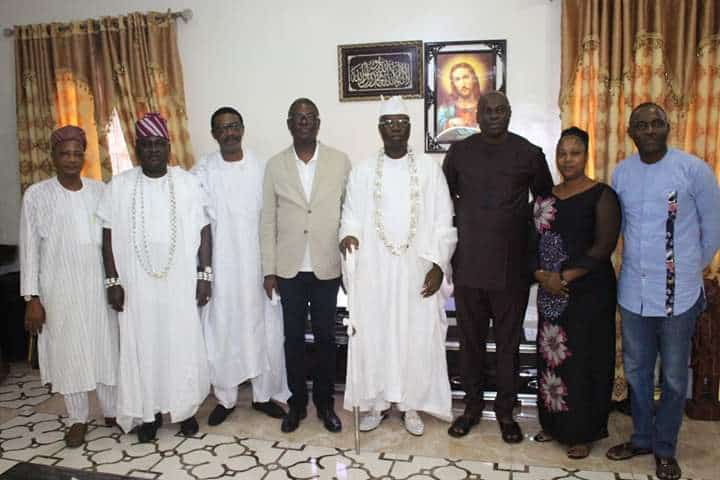 The Aare Onakakanfo of Yorubaland, Iba Gani Abiodun Ige Adams, has charged the Inspector General of Police, Mohammed Adamu, on the need to be proactive in tackling the various security issues in the country.
Speaking during a meeting with the representatives of the IG, Adams restated his beliefs in boosting local security, saying the best measure is to get people at the grassroots involved.
He told the top police hierarchy that as the Aare Onakakanfo of Yorubaland, there are pressures on him to act on the issues.
Adams said the Oodua Peoples Congress is ready to partner with the police in solving the security challenges in the country, adding that the group had a history of winning the war against Kidnapping, banditry and other social vices.
He said: “I commend the Inspector General of Police on this move.
“The visit, as far as I am concerned, is a welcome development and it goes a long way in solving the menace.
“The security situation in the country is becoming too worrisome with cases of killings, kidnapping, raping and banditry prevalent across the South West states and there is an urgent need to curb the menace.”
Responding, Adamu’s Chief of Staff, Jude Nwankor, who led the team of the police top hierarchy on the visit, said the reason for the visit was to seek Adams’ support in solving the security challenges in the country.
Nwankor said the police will be willing to to partner with the Yoruba leader given his deep knowledge and experiences in the grassroots.
He said: “We are happy to relate with you as a prominent voice in Yorubaland.
“We know there is no way we can secure the grassroots without local intelligence.
“The IG has indicated interest in seeking your assistance and support and that is why we are here to tell you that the police as an institution is ready to partner with you.”
Reflecting on the visit, a prominent Yoruba voice, Akin Osuntokun, described the emissary as a long-awaited realistic disposition towards apprehending and containing the security crisis bedevelling the country.
The synergy will go a long in stemming the trend of rural Fulani banditry and associated crimes in the South West, Osuntokun said.
Mogaji Gboyega Adejumo charged the police authority to engage indigenous police personnels in information gathering.
Adejumo said the people that understand the local terrain in information gathering are in the best position to gather information, adding that the role of OPC in security intelligence and gathering cannot be overemphasized.
Others present at the meeting included Asoju Aareonakakanfo of Yorubaland, Yinka Oguntimehin; Assistant General Secretary of OPC, Lasun Ogunfowokan; Chief Superintendent of Police Peter Gana; and Stella Gowon.
At the end of the meeting, Adams presented a letter to the IG, indicating his support and proffering solutions to the insecurity across the country.