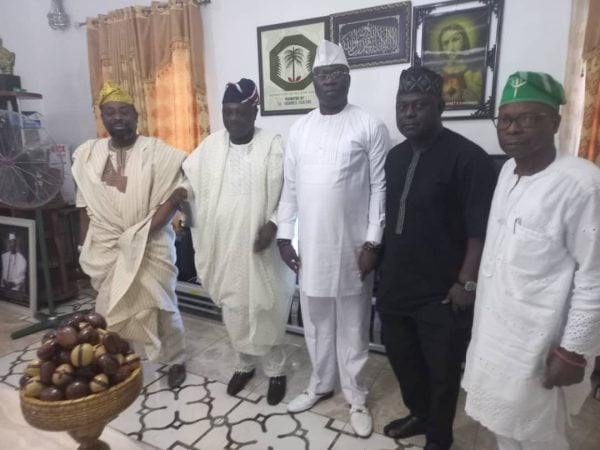 Aare Onakakanfo of Yoruba land, Iba Gani Abiodun Ige Adams,PanYoruba Group,Voice of Reason(VOR) have urged the Federal Government (FG) to use regionalism as a solution to tackle insecurity challenges in the country.

Aare Gani Adams made the disclosure while playing host to the newly appointed leaders of the Yoruba group at his Omole Phase 2 residence,in Ikeja,Lagos.

The Yoruba generalissimo said Nigeria has lost the battle to secure the country to terrorists, who daily terrorize the people across the country.

He added that the formation of the Southwest Security Stakeholders Group (SSSG) was in response to the prolonged security challenges bedeviling the region, maintaining that the security group is always ready to secure the region.

Adams, stated further that the visit by the leadership of VOR was in response to the growing concern of prominent Yoruba sons and daughters and other well-meaning Nigerians on the security quagmire across the south west region.

“I want to thank the leadership of VOR, a group of prominent Yoruba sons and daughters comprising intellectuals for this meeting.

“From their history, VOR has been consistent in promoting the ideals of true federalism, ” he said.

Meanwhile, Chairman of the group, Otunba Olusola Adekanola,said the meeting with the Yoruba leader was aimed at proffering a lasting solution to the security challenges in the south west.

VOR chairman expressed worry that the region is becoming volatile with the rampaging attacks of the terrorists.

He admitted also that the role of Aareonakakanfo of Yoruba land in terms of intelligence gathering and surveillance cannot be taken with levity, adding that the group will continue to partner with the office of the Aareonakakanfo on the issue of true federalism, insecurity and most importantly, the unity of the Yoruba race, which could help in securing the south west.

The Parakoyi Aareonakakanfo of Yoruba land, Prof.Raheem Kolawole in his remarks,urged other prominent Yoruba groups to rally round the Yoruba generalissimo in his efforts to ensure that the south west region is safe for the people.

Other members of the group present at the meeting include

the Secretary, Dr.Leke Oshunniyi, the Assistant Secretary, Kamar Raji, and the Publicity Secretary, Deacon Owolabi Oladejo among others.