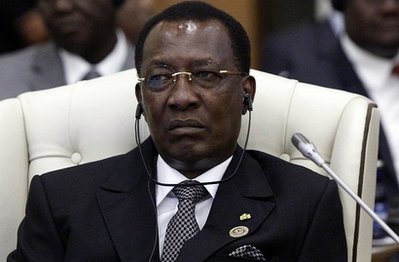 President Idris Deby Itno of Chad on Saturday in N’Djamena, advocated for the relocation of the Secretariat of the Community of Sahel Saharan States away from Libya.
The Chadian leader made the call at the extraordinary Summit of Heads of State and Governments of CEN-SAD at Radisson Blu Hotel N’Djamena, Chad.
CEN-SAD was created following the Treaty of Tripoli on February 4, 1998 with six founding members.
Nigeria joined the current 29-member regional economic community in 2001.
The regional body seeks mainly to create a free trade area in Africa, as well as “strengthen peace, security and stability, and achieve global economic and social development of its members.”
President Itno, who spoke in French language, noted with concern the state of insecurity in Libya, saying that former Secretary General of the body had worked under harrowing conditions on the heels of the situation in Libya.
He, therefore, stressed that with the degeneration of the security situation in Libya there was the need to look for an alternative secretariat for CEN SAD outside Libya.
He made allusion to the fact that the headquarters of African Development Bank among others had to be moved elsewhere in the past in the face of socio-political unrest.
“CEN-SAD requires relocation to another country while waiting for the situation in Libya to improve,” he said.
The Chadian leader expressed appreciation to member-nations for their support and assistance to the regional body.
He called for massive mobilisation of resources for the group and precise roadmap with the need to have an executive secretary for CEN-SAD.
He also challenged member-states on the need to address the issue of outstanding arrears.
Itno urged the group to fashion out means to ensure peace, stability and sustainable development across the African sub-region.
The News Agency of Nigeria reports that President Muhammadu Buhari was among the regional leaders at the summit of CEN SAD.
Goodwill message was also delivered at the summit by the African Union.