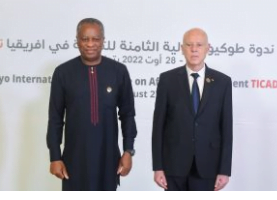 President Muhammadu Buhari has called for re-calibration of the African Union (AU) security mechanisms, so as to eliminate violent extremism, terrorism and banditry from the continent.

Buhari made the call in his speech on Peace and Security at the 8th Summit of the Tokyo International Conference on African Development (TICAD) in Tunis, Tunisa.

Buhari in the speech delivered by the Minister of Foreign Affairs, Geoffrey Onyeama, stressed the need for the re-calibration of AU’s Security mechanisms, such as the MultiNational Joint Task Force (MNJTF), the G5 Sahel and the African Standby Force.

The President said that it was Nigeria’s desire that the 8th TICAD summit saw to expanding the security cooperation and operations between Africa and Japan, within the framework of the New Approach for Peace and Stability in Africa (NAPSA).

He said that the conference offered Africa another opportunity to rub minds with brothers and sisters from Japan and also to share experiences on a number of common issues that affect the continents.

Africa is confronted with violent extremists and terrorist attacks in all the regions of the continent. This is further exacerbated by the rise of unconstitutional changes of governments in some parts of the continent.

“Thus, the development and growth of the African continent is increasingly being seriously challenged by insecurity.

“In Nigeria for instance, the activities of terrorists, bandits and kidnappers have led to the displacement of several communities and disruption of productive activities of our people.

“Undoubtedly, peace and development are two sides of the same coin. Peace is needed to engender development and provide necessary infrastructure requirements for our countries.

“In other words, strengthening peace and stability is a prerequisite for development.

“It is in this regard, that I wish to use this opportunity to appreciate the efforts of the Japanese and other partners in supporting ongoing efforts aimed at improving maritime and border security.

“Africa needs to pave the way for lasting peace and stability in the entire continent. To achieve this, there is an urgent need to upscale our peace and security architecture more than ever.

“The African Peace and Security Architecture (APSA) needs all the support it can attract from our development partners, including Japan.

“The various security mechanisms supported by the African Union such as the MNJTF, the G5 Sahel and the African Standby Force all need to be re-calibrated, to meet the current objective of definitively eliminating violent extremism, terrorism and banditry from the continent.

“It is our desire that this 8th TICAD summit will rise to the occasion by expanding the security cooperation and operations between Africa and Japan, within the framework of the New Approach for Peace and Stability in Africa (NAPSA).

“And for Africa to benefit from the use of Japanese technology in the fight against insurgencies in the continent,” Buhari stated.

Buhari also noted that over the past few years, Africa had witnessed a number of events that affected the Peace and Security of our various continents, in particular, Africa.

These events he noted included, Climate Change and global warming, which led to the shrinking of lakes, including the Lake Chad; rising water levels in some areas had also resulted in displacement of whole communities from their natural abode.

“Compounding the humanitarian crisis in the continent. The Global COVID-19 pandemic also exposed the vulnerability of our health and rapid response system.

“And of course, the conflict between Russia and Ukraine has weakened and continues to threaten World Food Security,” he added.

Buhari said that Nigeria remained grateful to the Japanese Government for the support it continued to extend to the country in different areas of partnership, especially through the Japanese International Cooperation Agency (JICA).

He said that TICAD had continued to provide a constructive platform for strategic partnership between Africa and Japan for development cooperation.

The News Agency of Nigeria (NAN) reports that Onyeama met with President Kais Saied of the Republic of Tunisia, on the sidelines of the Conference.