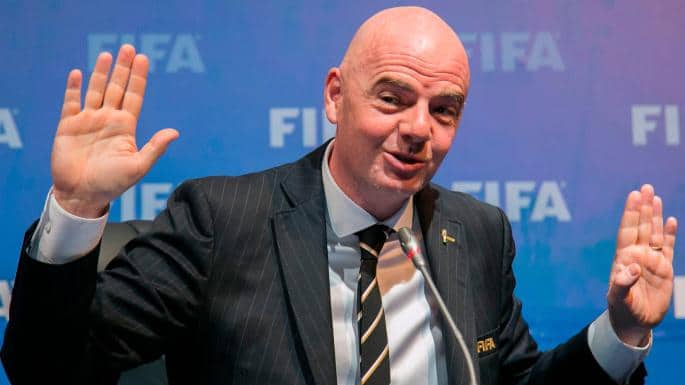 FIFA president, Gianni Infantino, says he will push again for the creation of a Women’s World League in spite of having his initial plan blocked inside the organisation.
The FIFA president said the success of this year’s women’s World Cup showed that there was an appetite for top level competition and that new tournaments needed to be created.
“We have to build on the momentum of this fantastic World Cup,” Infantino told a conference on the women’s game.
The Swiss official has already announced that the 2023 World Cup will feature 24 nations, up from 16, with the venue to be decided next June.
He added that his plan for a global competition for national teams needed to be brought back to life.
Infantino said he originally came up with the idea in 2017 and the plan had received “big, big support” from football officials across the world.
He said: “We then brought it back to the council of FIFA, where it was, shall I say, put on hold. Or, blocked for probably some sports political reasons. I don’t know exactly why.
“But we will bring it back on the table until it will be approved.”
Infantino also said he wanted to see an annual Club World Cup for women’s teams to boost the game outside of the national team structures.
“We need to create a World Cup for clubs. We cannot think that we can seriously develop women’s football by only having national teams,” he said.
“We need clubs as well and to give them more reason to invest and to give them a stage where they can perform.
“So, I will propose a Club World Cup. Every year, starting next year or the year after next. I don’t think it takes us a long time to organise it,” he added.
The FIFA president said the format would see 16 or 24 clubs playing in a tournament of three to four weeks and the host nation would be rotated globally.