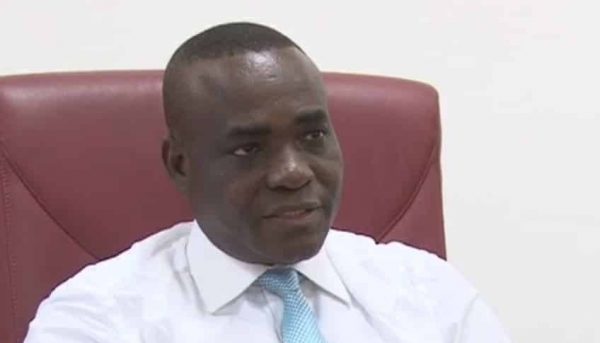 Enang made this remark in a letter dated July 5 and addressed to the APC National Chairman, Sen. Abdullahi Adamu and made available to newsmen on Wednesday in  Lagos.

Enang was reacting to controversies and protests surrounding the May 26 APC governorship primaries and INEC’s report that the APC did not conduct any governorship election primary in Akwa Ibom.

The letter was titled:.  “Akwa Ibom APC Fruitless Primaries and “No Candidates” Challenge : Electoral Act 2022, Our “Bigger Than the Law” Posturing and Not INEC is Our Problem”.

Enang urged the chairman and the National Working Committee (NWC) to  prevent a situation where the APC would have no candidates in the elections.

He explained that the National Assembly in the 2010 Electoral Act vested much powers as to congresses and conventions to choose candidates on political parties, expressing same to be the internal affairs of the respective political parties.

According to him, the 2022 Electoral Act confers monitoring and indeed more active functions and powers on the electoral management body (INEC) from their experiences in the actions of the management of the respective political parties in the conduct of party primaries and party affairs generally.

Enang said: “The section 84 (1) says that nomination congress shall be monitored by INEC.

“INEC did not monitor these purported congresses that produced the candidate in the Ntukepo led executive, and so cannot be obliged to file the products thereof.

“INEC was at the Austin Ekanem led executive and duly monitored the Senate, House of Representatives, and House of Assembly primaries according to law and therefore,  only bound to accept, and file the candidates therefrom emerging.

“Therefore, in accordance with sections 84 (5)(c) of the Electoral Act 2022 as Amended,  it is the aspirant who emerged from the INEC monitored, senatorial, Reps and assembly primaries being winners of the primaries of the party and the aspirants name shall be forwarded to the commission as the candidate of the party.”

He said  the names forwarded to INEC were not the names of persons who emerged from valid primaries monitored by INEC and conducted by legitimate officials of the party.

The senator said  the names sent were the ones conducted by the Ntukepo led club not monitored by INEC.

“By failing or refusing to send the names of the aspirants who emerged from validly conducted primaries monitored by INEC, the party is latently declaring that it does not intend to sponsor candidates for the senatorial, house of representatives and house of assembly elections.

“This is the law and INEC is bound to comply,” he added.

He said that sections 84(13) prohibited INEC from including “our candidate for the said legislative houses elections.’

Enang added that even if INEC were to mistakenly or inadvertently include these candidates that  emerged from invalid primaries, other political parties would sue INEC and such inclusion would be annulled.

“Section 84(8) provides for the election of delegates to vote in primaries for legislative, gubernatorial and presidential elections.

“It is therefore, important to determine which delegates voted at the purported Ntukepo led executives,” he said.

He added: “These are the leadership that legitimately elected INEC monitored delegates to the states congresses and National Convention.

“Accordingly, only these delegates can, as INEC insisted, elect the governorship and presidential candidates as the various courts ordered at the national convention on June 7,at Abuja.

“It is the list of these national delegates that emerged at the Austine Ekanem led wards and local government chapter led executives that INEC national headquarters produced during accreditation at International Conference Centre, Abuja, as the list they monitored at wards and chapter levels which they have at their office and their records, which any person can today apply and obtain a  certified copy.

“Afortiori, It is only the delegates list of the Austine led executive, under the law and in fact that can be used to elect gubernatorial, senatorial, house of representatives and house of assembly candidates.”

Enang said  the candidates for the senatorial, house of representatives and house of assembly in the primaries monitored by INEC should be forwarded to INEC as candidates of the party.

According to him, the chairman and NWC should certify and forward to the party leaders in Akwa Ibom,  the list of authentic and authenticated ward executives, local governments chapter executives and state executives who may have emerged from valid INEC monitored respective congresses at wards, chapter and state levels, to enable actors know who to deal through.

Enang said: “If it appears too confusing, challenging, fraudulent, illegal, unworkable, confidence deficient, debasing, shamefully and incapable of leading to electoral success, the NEC and NWC should do the needful.

“The party and members should please consider all the issues heretofore stated, and we will accept that INEC is not the problem but the Electoral Act, which must be complied with or we will not have candidates.

“If the party decides to abandon and exclude Akwa Ibom in the filing of legislative candidates, who emerged from valid primaries known to law and INEC, insisting on rights only known to repealed Electoral Act 2010, we will not have rallying and vocal candidates in the various senatorial districts and constituencies who will be the rallying agents to garner votes for our presidential candidate.

“Can we go into election with these incoherent clubs in the guise of executive which cannot get to draw a state theme for the campaigns?

“Can the different tendencies mount the same podium to campaign for our candidate to produce result? The answer is in the negative.”

Enang, who expressed the assurances of his loyalty to the party, promised to abide by the decision of the party “whatever the pain I shall not port, but abide.” NAN