Industrialist set to give wife befitting burial in Osun 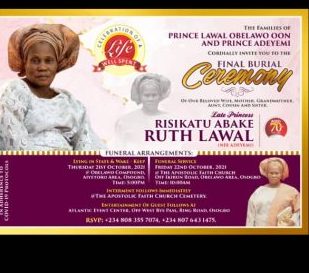 The lying in state and wake-keep, according to information on Thursday, will hold on October 22 at Obelawo compound.

The funeral service will hold at the Apostolic Church Faith Church, Osogbo on October 22, while entertainment of guests will take place after funeral service at Atlantic Event Centre, Osogbo, with renowned musician, King Sunny Ade, on band stand.

The deceased, who was a devout Christian and virtuous woman, committed her life to the service of God and humanity.

Aged 70, the late Princess Obelawo was a rallying and reference point for the entire Obelawo family, a virtue she sustained till she departed this sinful world.

Survived by her husband, who is also the Chairman of LOPIN Manufacturing Company Limited, children and grandchildren, including Princess Kiki Lawal, popular Lagos socialite; and Chairman, Vinefield Energy and Allied Services Limited, Prince Seye Obelawo; and Chairman of Bedrock Integrated Limited, Prince Abiola Obelawo, the late Princess Obelawo will be sorely missed not only by her family members but Osogbo community at large, the statement added.

The funeral ceremony will be attended by the creme de-la- creme from all walks of life.