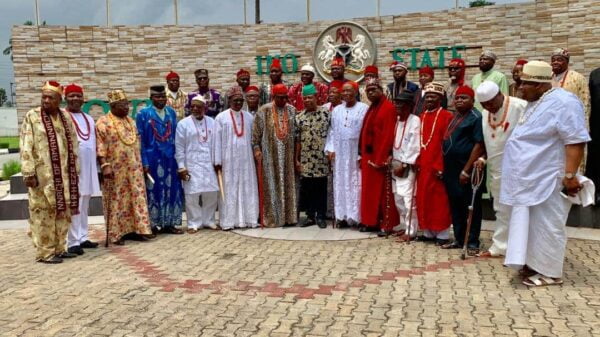 Traditional rulers of Imo State have commended the State Governor, Rt. Hon. Emeka Ihedioha, on his decision to implement the use of the Treasury Single Account.
In a meeting with the governor, the monarchs, under the aegis of Concerned Traditional Rulers’ Forum, led by Dr. Cletus Ilomuanya, said the adoption of the TSA will go a long way in ensuring prudent management of funds in the state and enthrone probity in governance.
The spokesman of the Forum, His Highness, Eze Anayochkwu, said: “Your excellency, we commend your readiness to initiate TSA in the state.
“It will curb financial recklessness and ensure accountability in the funds of the state.”
Similarly, in a separate meeting with the governor of Imo State at the Sam Mbakwe Executive Council Chamber, Government House, the Christian Association of Nigeria, Imo State chapter, extolled Ihedioha for not relenting in signing the Executive Order 005 to bring into force the use of the TSA by the state government.
The Chairman of the group, Godson Ibeji, said the TSA was important for any government that wished to be fiscally disciplined.
The group solicited the state government’s support to renovate the state secretariat of CAN, which, according to him, is in a sorry state.
The governor, in his remarks, said more commendable policies from the state government were in the pipeline.
Ihedioha said the TSA was borne out of his intention to operate a transparent system in the state.
His words: “I discovered there were leakages in the revenue accruing to the state government.
“This was largely due to numerous accounts being used for collection.
“We discovered over 250 bank accounts operated illegally by the past administration.
“Those were the pipes through which Imo treasury were looted.
“TSA will sanitise the financial system in the state.
“I want to run a transparent government and that is what we have enthroned.”