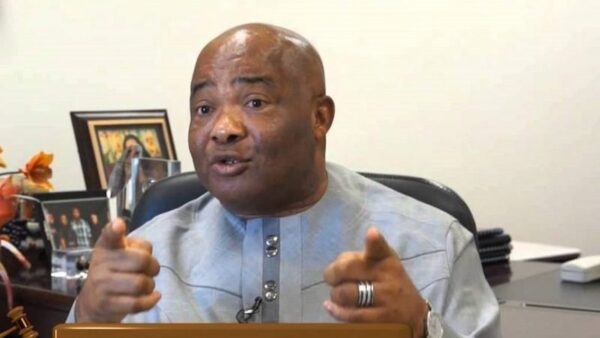 Governor Hope Uzodinma of Imo State has asked the Supreme Court to dismiss an application filed by former Governor of the state, Emeka Ihedioha.
Ihedioha had filed an appeal seeking judicial review of the apex court’s judgement, which had on January 14, 2020 ordered his removal from office.
The News Agency of Nigeria reports that Uzodimma’s preliminary objection was against a motion on notice dated February 5, filed by Ihedioha and the Peoples Democratic Party.
They prayed the Supreme Court  for an order setting aside as a nullity the judgment delivered by it on January 14.
Uzodimma and the All Progressives Congress’s preliminary objection against Ihedioha was brought pursuant to Section 6(6)(a) of the 1999 Constitution of the Federal Republic of Nigeria, as amended.
The objection raised and argued the competence of the motion and the jurisdiction of the court to entertain same and therefore urged the apex court to strike out the motion filed by Ihedioha.
They said the application being a proceeding relating to or arising from election of a governor is barred by effluxion of time.
“The application constitutes an invitation to the Supreme Court to sit on appeal over its final decision,” Uzodimma posited.
They submitted that having delivered its final decision, the Supreme Court has become fuctus officio and divested of jurisdiction over the same subject matter.
They said: “Order 8 Rule 16 of the Supreme Court Rules 2014 prohibits the apex court from reviewing its judgment once given and delivered, save to correct clerical mistakes or accidental slip.
“The judgment sought to be set aside having been given effect by the inauguration of Uzodinma as Governor of Imo, this Honourable court lacks the jurisdiction to grant the prayer sought.”
More so, Uzodimma stated that Ihedioha’s application “constitutes an abuse of court process” and “is against public policy”.
He added that the application filed by the ousted governor amounts to an invitation to the Court to indulge in academic exercise and answer hypothetical questions.
NAN reports that after the March 9, 2019 gubernatorial election in Imo State, the Independent National Electoral Commission had declared Ihedioha as winner of the poll.
Aggrieved by the declaration of Ihedioha by INEC as winner of the governorship election, Uzodimma and APC challenged the said declaration by way of a petition.
The petition ultimately led to the appeal by Uzodimma and APC against the decision of the Court of Appeal, which by majority decision dismissed their appeal against the decision of the Election Tribunal to the apex court.
Uzodimma also reminded the Supreme Court that amongst the orders issued in the judgment by His Lordships was Order 7, which read: “It is hereby ordered that a certificate of return shall be issued to the 1st appellant,  Uzodinma forthwith and he should be sworn in as the Governor of lmo State immediately.”
He said the above order has since been made effective by his inauguration as the Governor of lmo State.
However, the Supreme Court on January 14 held that there was merit in the appeal filed by Uzodimma and allowed same.
Consequently, the judgment of the lower court affirming the judgment of the Governorship Election Tribunal, which declared Ihedioha winner of the Imo governorship election, was set aside.
Among the orders, the Supreme Court declared that votes due to Uzodinma and APC from 388 polling units were wrongly excluded from the score ascribed to them.
It ordered that the appellants’ votes from the 388 polling units unlawfully excluded from the Appellants’ score shall be added to the results declared by the INEC.
The Supreme Court also declared that Ihedioha was not duly elected by a majority of lawful votes cast at the said election, and that his return as the elected Governor of Imo State was null and void and accordingly set aside.
The matter is coming up on February 18 in the Apex court.