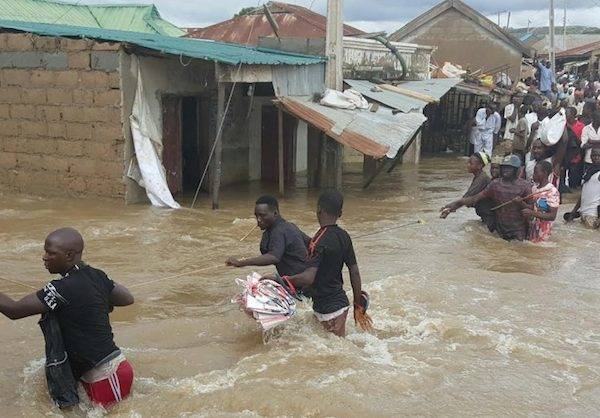 Hon. Kingsley Uju, representing Oguta Ohaji/Egbema Oru West Federal Constituency, said on Tuesday that the number of internally displaced persons from the recent flooding in the area had risen to 6,000.
Uju said this when he visited the affected communities, where he told officials of the National Emergency Management Agency that some of the displaced people were still trapped in the bush.
News Agency of Nigeria reports that about 60 houses in 15 communities in Ohaji/Egbema and Oguta Local Government Area on Thursday, following a heavy downpour.
It will be recalled that the Head of Imo/Abia Operations Office of NEMA had during an on the sport assessment on Friday put the number of IDPs at 2,000.
The lawmaker further said that property worth over N100 million were destroyed by the flood.
He said: “We are calling on NEMA and other donor agencies to come to the aid of my people because what we have here is near crisis situation.
“Economic and social wealth have been lost, my people have taken refuge in nearby communities, they need urgent intervention now.”
Uju attributed the disaster to unusual rise in the sea level, adding that the affected communities were flood prone.
He said that the communities had decided to embark on premature harvest of their farm crops, fearing that the development could lead to the shortage of food later in the year.
Evans Ugoh, Head Imo/Abia Operations Office of NEMA, assured the victims of NEMA’s urgent intervention.
He said: “I have seen the level of damage caused by the flood. I assure all of you that NEMA will assist you.
“I will finish my assessment soon and forward the report to the head office and be hopeful that your plight will get to the appropriate authorities.”