I’m prepared for governance, ready to fight for Nigerians – Ezekwesili 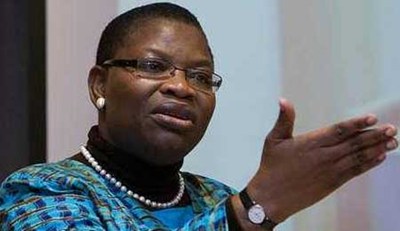 The presidential candidate of the Allied Congress Party of Nigeria, Dr. Obiageli Ezekwesili, has expressed readiness to fight for the rights of Nigerians and eradicate poverty in the country.
She said this at a dinner in Lagos where Ellen Johnson-Sirleaf, former president of Liberia, endorsed her presidential ambition.
During the dinner, which was organised by Women in Successful Careers, Ezekwesili narrated her age-long friendship with Sirleaf, part of which was her role as a senior adviser on economic reforms to the ex-Liberian president.
The ACPN presidential candidate explained that the exemplary leadership of Sirleaf showed when “a woman stands up to say ‘I want to lead’, she is ready to serve.”
Ezekwesili said that Nigerians needed “a leader that is willing to give their all in character , competence and capacity to serve the people and take the country out of stagnation, mediocrity and cycles of failure in the hands of old order politicians.”
According to her, women and youths must find their voice in our country, and demonstrate that they are fed up of poor quality leaders who have held the country down regardless of which political party holds sway.
“It is time to vote them out so we can build a prosperous, stable and harmonious nation where everyone has equal opportunity to do well,” she added.
While urging Nigerians not to give up on the country, she said: “It is either we all resigned to hopelessness, surrendered and said thank you Nigeria, you defeated us, or we did one more thing; and that is, to mobilize ourselves  as citizens and elect as President in 2019, a person whose track record of service to Nigeria and Nigerians is well known. That person is Oby Ezekwesili.
“I detest the bad leadership by old order political class while the country totters. I am therefore ready to mobilise my fellow citizens to #Fight4Naija. Nigeria needs all of us to fight for her rescue from the grips of those who are planning to be re-elected or elected again so that they can fail even more and watch more citizens join the already 87 million extremely poor Nigerians.
“The 2019 election is our opportunity to say ‘No’ with finality. It is truly now over for those who cannot offer any innovative ideas for the development of our country.
“In recent time, we haven’t seen people break out of poverty as it used to happen. A lot of our politicians and elite like me all had the opportunity to break out of poverty through access to education. Sadly these days, our people are trapped in poverty and parents cannot give qualitative education to take their children out of poverty. It is an entrapment that we must urgently destroy. ”
Ezekwesili warned that Nigeria cannot make progress with the increasing rate of poverty and declared that she was ready to rescue Nigeria from mismanagement.
She said: “How long are we going to last if we keep growing a an inter-generational dynasty of poverty? Nigeria has now taken over from India, which is 1.3 billion people and also seven times our population, as the world headquarters of extreme poverty.
“On the day that statistics came out, there wasn’t even an outrage from our politicians. Instead, political parties were busy passing the buck, defending their administrations and blaming others.  No sense of embarrassment of such massive failure of our country. There is no better evidence of failure of our political class.”
“Nigeria and Nigerians need to be rescued. It is time to say no to crippling failures. It is truly now that we must fight!.”