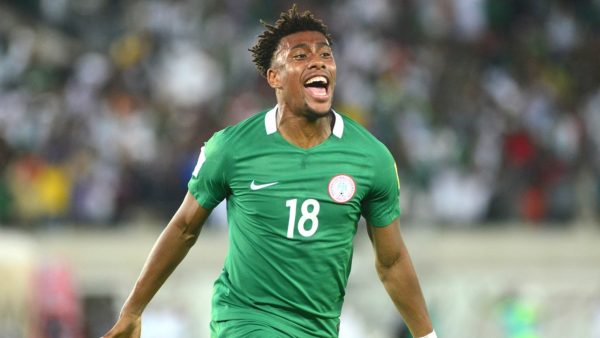 Alex Iwobi has said he is not comfortable with his role at Arsenal, as he would prefer to play as a central midfielder.
The 23-year-old, who is currently representing Nigeria at the 2019 Africa Cup of Nations, has been utilised in a forward position due to the presence of Mesut Ozil, Granit Xhaka and Lucas Torreira at the club.
Last season, he featured 35 times in the Premier League, 13 of which as substitute, making 951 passes and creating 40 chances.
Speaking from Nigeria’s base in Egypt, Iwobi revealed he would rather play in the middle of the pitch, but is ready to feature wherever he is needed by manager Unai Emery.
“I’m happy to play anywhere; I will play wherever I’m told to play,” Iwobi told Goal.
“Growing up, I played as an attacking midfielder, more central in the midfield. I wouldn’t say I was most comfortable there; but, that’s where I grew up playing.
“I’ve always seen myself as a midfielder, but wherever I’m being told to play in the middle or somewhere, I will always give my best,” he said.
Iwobi scored the Gunners’ only goal in their 4-1 defeat to Chelsea in the Europa League, having replaced Torreira in the 66th minute.