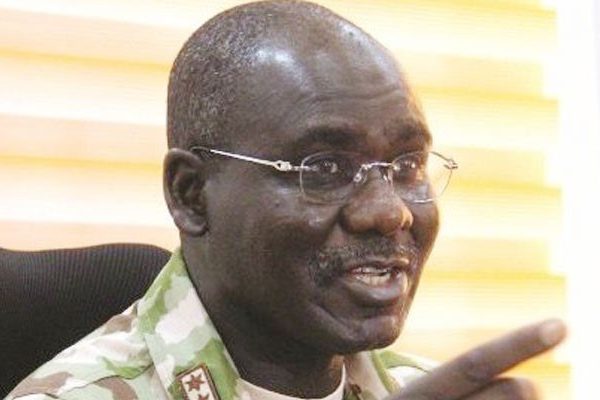 The Abuja Division of the Federal High Court has ordered the Chief of Army Staff, Lieutenant General Tukur Buratai, to pay N11 million as damages for the breach of fundamental rights of 11 Gombe State indigenes illegally detained by officers of the Nigerian Army.
The court, in a judgment delivered by Justice Ijeoma Ojukwu, declared the detention of the applicants: James Yusuf, Ishaya Ali Poshiya, Nehemiah Yohanna Poshiya, Husseini Poshiya, Hamma Poshiya, Yusuf Mafindi, Yila Boyi, James Bare, Ezekiel Dandaudu, Ali Ishaku and Ilya Bala, since July 6 as illegal and unconstitutional.
Aside ordering the immediate release of the detainees, the court directed the Army boss to pay them N1 million each.
The court maintained that no arresting authority was permitted to arbitrarily detain a person beyond the statutorily prescribed period.
Justice Ojukwu held: “The long detention and torture, without detention order, of the Applicants since July 6, 2018, by servants and agents of the 1st defendant, COAS, is illegal and unconstitutional and is a violation of the applicants’ fundamental rights as enshrined under Sections 34 and 35 of the Constitution of the Federal Republic of Nigeria 1999.
“The 1st Respondent shall pay the sum of N11,000,000 (Eleven Million Naira) only to the applicants (jointly) as damages for the breach of the applicants’ rights under Sections 34 and 35 of the Constitution of the Federal Republic of Nigeria 1999.
“No circumstances whatsoever may be invoked as a justification for torture or other cruel, inhuman or degrading treatment or punishment.
“All law enforcement officers must conform with accepted norms and rule of law in the discharge of their statutory duties.”
The judgement followed a fundamental right enforcement suit, marked: FHC/ABJ/CS/777/2018, which the Applicants filed through their lawyer, Mela Audu Nunghe.
The Applicants anchored their suit on sections 34, 35, 36, 41 and 46 of the 1999 constitution, as amended.
Aside Buratai, the Attorney General of the Federation, Abubakar Malami (SAN), was equally cited as the 2nd Respondent in the matter.
The court processes disclosed that the Applicants were arrested by officers of the Nigerian Army, following the murder of one David Jauro Stephen.
It was averred that the deceased had on July 6, 2018 gone to his farm where he was attacked by persons from a neighbouring village, Shongom.
The Applicants reportedly discovered the corpse in the farm and were in the process of conveying it home when they were arrested by soldiers and subsequently detained at the Army Barracks in Gombe State.